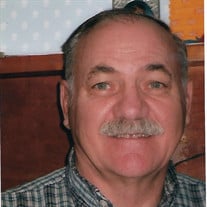 Sussex – William (Bill) L. Kiss, age 77, peacefully passed away on Thursday, July 9, 2020 at his residence. Born and raised in Trenton to the late Gaza and Helen (Christensen) Kiss, he lived in Trenton before moving to Sussex County 38 years ago. Mr. Kiss served in the United States Armed Forces from 1961 to 1988, and was proudest of his time in the United States Marine Corps. He began his military service in the active-duty Marines and served two tours in Vietnam and rose to the rank of Staff Sergeant. Bill left active-duty in 1969 and continued his military service in the Marine Corps Reserves as a Combat Engineer and Military Policeman, as a Seabee in the Navy Reserves, and ultimately retired as a Sergeant First Class in the Army National Guard in New Jersey. Mr. Kiss began his career in law enforcement in 1972, serving as a Trenton Police Officer, Mercer County Constable, Annandale Corrections Officer, NJ Marine Police Officer, and as a Park Ranger in Swartswood, Wawayanda and Liberty State Parks. He retired as a State of New Jersey Law Enforcement Officer in 1988 with his highest held positions as Senior Marine Police Officer and Senior Park Ranger. In addition to his career in law enforcement, Mr. Kiss was a member of the Bricklayers Union #6 since 1970 and worked as a concrete mason. Bill was active in the veteran community serving as a member of the Veterans of Foreign Wars, and was appointed the National Aide-de-Camp in 1970-1971. Mr. Kiss was a founding member and the first Commandant of the Marine Corps League, Det. #747, in Sparta, NJ; and member of the Det. #754 in Lowville, NY. Mr. Kiss was a member of the Sussex Fire Department Fire Police and served as Captain, as well as a member of the Lions Club in Newton. In 1997, Bill received the Chapel of Four Chaplains, Legion of Honor Award in recognition of his service to all people regardless of race or faith. Besides his parents, he was predeceased by his brother, David Kiss in 1995. Mr. Kiss is survived by his wife of over 40 years, Susan (Stillwell); his four sons, Christopher (Jill) of Fairfax, VA, Wesley of Franklin, Daniel (Cinthya) of Hershey, PA, and Matthew of Sussex; his brother, Gary Kiss (Ruthann) of Hamburg; and five grandchildren, Juliet, Jake, Alexander, Annabelle and Liam; and numerous nieces and nephews. Friends are invited to pay their respects to the family from 4 to 7 p.m. on Tuesday, July 14, 2020 at the Pinkel Funeral Home, 31 Bank Street (Route 23), Sussex. Fireman services will begin at 7 p.m. directly followed by a funeral service. Inurnment will be held at 1 p.m. on Thursday, July 16, 2020 at the Northern New Jersey Veterans Memorial Cemetery on Route 94 in Sparta. In lieu of flowers, the family requests that memorial donations may be made either to the Sussex Fire Dept., 25 Loomis Avenue, Sussex, NJ 07461, or the Northern NJ Veterans Memorial Cemetery, P.O. Box 82, 75 North Church Road, Sparta, NJ 07871. Online condolences may be offered to the family at www.pinkelfuneralhome.com.

Sussex &#8211; William (Bill) L. Kiss, age 77, peacefully passed away on Thursday, July 9, 2020 at his residence. Born and raised in Trenton to the late Gaza and Helen (Christensen) Kiss, he lived in Trenton before moving to Sussex County 38... View Obituary & Service Information

The family of William L. Kiss created this Life Tributes page to make it easy to share your memories.

Send flowers to the Kiss family.