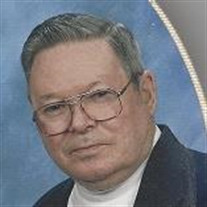 Sussex - William M. Hunt, age 88, passed away on Monday, December 19, 2016 at the Karen Ann Quinlan Home for Hospice in Fredon. Born on September 2, 1928 in Sussex, New Jersey to the late Judge Marshal and Margaret (Rude) Hunt, Bill was a graduate of Sussex High School and attended Blair Academy in Blairstown. Mr. Hunt graduated Lafayette College and was a member of Sigma Chi. He had enlisted in the United States Marines in 1951 and was honorably discharged in 1953. Mr. Hunt had resided in Sussex for most of his life. He had been employed as a field representative for GMAC in Newark, had worked for the 1960 census, and retired in 1991 from Sussex Borough, where he served as Treasurer, Assessor and Collector. Mr. Hunt had been a member of the First Presbyterian Church of Sussex for over 65 years and served as an elder and was a former board member of the Fairview Cemetery Association. Due to his long love of knowledge, family and history, Bill enjoyed being a member of the Minisink Historical Society of Port Jervis and a life member of the Sussex County Historical Society. He was predeceased by two brothers, Marshal Hunt and John Hunt and a sister, Margaret Hunt Stevens. Mr. Hunt is survived by his wife of 44 years, Suzanne (Hutchison); his sister-in-law, Janet Hunt of PA and several nieces and nephews. Funeral services will be held at 11 a.m. on Friday, December 23, 2016 at the Pinkel Funeral Home, 31 Bank Street (Route 23), Sussex. Interment will follow at Fairview Cemetery. Friends may pay their respects to the family on Thursday from 2-4 and 7-9 p.m. at the funeral home. In lieu of flowers, the family requests that memorial donations may be made to the First Presbyterian Church of Sussex, 21 Unionville Avenue, Sussex, NJ 07461, Sussex County Historical Society, 82 Main Street, Newton, NJ 07860, or to the Minisink Historical Society, 127 W. Main Street, Port Jervis, NY 12771. Online condolences may be offered to the family at www.pinkelfuneralhome.com

The family of William M Hunt created this Life Tributes page to make it easy to share your memories.

Send flowers to the Hunt family.