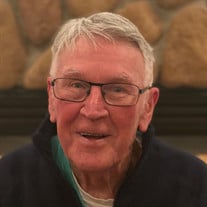 Wantage- William Lewis Cronin, age 88, of Wantage, passed away on Thursday, February 6, 2020 at Alaris Health At The Chateau at Rochelle Park while surrounded by his loving family. Born on January 2, 1932 in New Haven, Connecticut to the late James A. Cronin and Lillian (Sheiffele) Cronin, Bill was raised in West Haven, Connecticut. He moved to Alaska after high school, where he was later drafted in the United States Army during the Korean War. After serving for two years in Alaska, Bill was honorably discharged and returned home to Connecticut. He then attended Fairfield University, graduating with a degree in accounting in 1959. He lived in Rockaway Township for many years before moving to Wantage in 2003. Bill was an avid golfer, loved to cook and wintered in Hilton Head Island, South Carolina. Besides his parents, he was predeceased by his two brothers; James Cronin, II and Robert Cronin. Bill is survived by his wife of 44 years, Deanna Cronin; his daughter, Susan Roman and her husband Jeffrey of Wantage; his son, William J. Cronin and his wife Kristine Kupcha of S. Burlington, Vermont; his six grandchildren, Kaitlyn Roman, Korey Roman, Jack Cronin, Reece Cronin, Carissa Smith, and Carter Smith; his sister, Carol Celentano of West Haven, Connecticut; his sister-in law, Bernice Cronin of Fairfield, Connecticut and several nieces and nephews. A memorial service will be held on Saturday, February 15, 2020 at 11 a.m. at The Church of the Good Shepard, 200 State Rt. 23 in Wantage. In lieu of flowers, the family requests that memorial donations may be made in Bill’s memory to the Alzheimer’s Association, 225 N. Michigan Avenue, Fl. 17, Chicago, IL 60601. Private cremation services have been entrusted to the Pinkel Funeral Home, 31 Bank Street (Route 23), Sussex. Online condolences may be made to the family on www.pinkelfuneral home.com

Wantage- William Lewis Cronin, age 88, of Wantage, passed away on Thursday, February 6, 2020 at Alaris Health At The Chateau at Rochelle Park while surrounded by his loving family. Born on January 2, 1932 in New Haven, Connecticut to the late... View Obituary & Service Information

The family of William L. Cronin created this Life Tributes page to make it easy to share your memories.

Send flowers to the Cronin family.