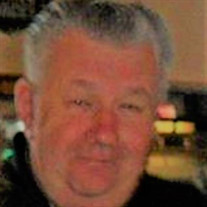 Sussex- Wayne F. Clark, Sr., age 71, peacefully passed away while surrounded by his loving family on Sunday, August 5, 2018 at Karen Ann Quinlan Home for Hospice in Fredon Township. Born in Franklin to the late Frederick and Frances (Southard) Clark, Wayne has lived in Sussex County all of his life. He had been employed as a machine operator for Ames Rubber in Hamburg for fifty years and just recently retired three years ago. Mr. Clark was a member and Past Chief of the Vernon Fire Department. He enjoyed hunting, fishing, race cars, and attending auctions. Besides his parents, Mr. Clark was predeceased by his brother, Garry Clark on July 15, 2014 and his sister, Fay Clark on May 27, 2018. He is survived by his wife of 51 years, Pamela (Houghtaling) Clark; his two sons, Wayne F. Clark, Jr. and Bobby Clark both of Wantage; his two sisters, Debbie Compton and Judy Clark both of Meshoppen, PA; and his grandson Joshua. Funeral services will be held at 7 p.m. on Tuesday, August 7, 2018 at the Pinkel Funeral Home, 31 Bank Street (Route 23), Sussex. Friends may pay their respects to the family prior to the service from 4 p.m. to 7 p.m. at the funeral home. Private cremation services will be held at the convenience of the family. In lieu of flowers, the family requests that memorial donations may be made to Karen Ann Quinlan Home for Hospice, 99 Sparta Avenue, New ton, NJ 07860. Friends may offer their condolences to the family at www.pinkelfuneralhome.com

The family of Wayne F. Clark Sr. created this Life Tributes page to make it easy to share your memories.

Send flowers to the Clark family.