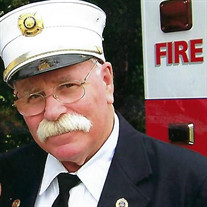 Walter Joseph Storms, age 73, of Wantage, passed away peacefully Wednesday, August 1, 2018 at St. Augustine Health & Rehabilitation Center in St. Augustine, FL after a long illness. Born in Hardyston to the late William and Christina (Smith) Storms, Walter lived in Sussex County all of his life. He served in the United States Navy during the Vietnam War, where he learned his trade as a plumber. Walter was a master plumber and was the owner and operator of Storms Plumbing & Heating in the Sussex-Wantage area for many years. He retired from his business in December 2016. Prior to owning his own business, he worked for AW Seigel Plumbing & Heating in Sussex for many years. He was a member of the Vernon VFW Post 8441 where he served as commander in 1973-1974 and a member of the American Legion Post 213 in Sussex. Walter was a 40 year life member of the Sussex Fire Department & First Aid Squad, where he served as chief in 1994 and 1995. Walt proudly marched in the Fire Department’s color guard, served as drill master for the department, and was captain of the Fire Department’s hose laying teams. He enjoyed the position of catcher for the department’s softball team, where he helped lead the team to two consecutive championships in 1978 and 1979. Walt was also an exempt member of the New Jersey State Fireman’s Association and the New Jersey Chief’s Association. He was an avid hunter and fisherman and was a member of the Virgin Acres Gun Club and the Colesville Gun Clubs. He loved his many different pets over the years; especially his dogs, Spook & Benson. Walter was also an avid fan of the New York Yankees and the New York Giants. Besides his parents and siblings, Walter was predeceased by his wife, Judy Storms in 2009. He is survived by his daughters; Rhonda Olsen and her husband DJ of St. Augustine, FL. And Judith Vander Ploeg and her husband Rick of Wantage; his son, Richard Crowell and his wife Stephanie of Sussex; his siblings, Spurgeon and his wife Sharon of TN, Rhoda and her husband Pete Tormey of Sandyston, Rosemary Meyers and her fiancé Skip of PA, Cindy and her husband Tony DeFabritis of Blairstown, his step-siblings, John Zellers, Florence Ervey and Flossie Cook; his Cherished grandchildren, Grace, RJ, Patrick, Christopher, Danielle and McKenzie; his great-granddaughter, Paisley Mae; many nieces and nephews; and his beloved companion and buddy, Benson. Funeral services will be held at 10:30 a.m. on Tuesday, August 7, 2018 at the Pinkel Funeral Home, 31 Bank Street (Route 23), Sussex, New Jersey. Interment will follow at Clove Cemetery. Friends may pay their respects to the family on Monday from 4 p.m. to 7 p.m. at the funeral home. American Legion Post 213 services will begin at 7 p.m. with Sussex Fire Department services immediately following the Legion service. In lieu of flowers, the family requests that memorial donations may be made to: Sussex Fire Department, 25 Loomis Avenue, Sussex, NJ 07461 or the Alzheimer’s Foundation of America, 322 Eighth Avenue, 7th Floor, New York, NY 10001. Online condolences may be offered to the family at www.pinkelfuneralhome.com

The family of Walter Joseph Storms created this Life Tributes page to make it easy to share your memories.

Send flowers to the Storms family.