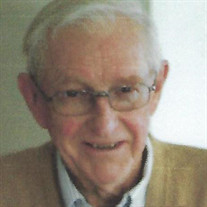 Wantage - W. Wayne Young, age 89, peacefully passed away on Sunday, August 11, 2019 at his residence while surrounded by his loving family. Born in Steele, Missouri to the late William Frank Young and Annie (Pitt) Young, Wayne attended Deering High School in Missouri and graduated from David Lipscomb College in Nashville, Tennessee with a BA in History in 1957. He later earned an MA in Social Studies from Montclair State and a 6th year certificate in Curriculum and Teaching from Hunter College in New York. Wayne served his country in the United States Army from 1951 to 1953 during the Korean Era, earning the rank of Sargent. He was a resident of Wantage since 1974. Wayne taught in Jefferson Township at the Ellen T. Briggs School and the Jefferson Township High School from 1957 to 1992. He served as the Chair of the Social Studies Department from 1969 until his retirement in 1992. After his retirement, Wayne helped his wife at the Young School and was known as “Farmer Young” to all the students and their families. He joined the First Presbyterian Church of Sussex in 1975 and served as an Elder and former Treasurer. Wayne had many hobbies, which included; reading, gardening, livestock, and history. He was predeceased by his siblings, Earl, Frances, Edna and Marjorie. Wayne is survived by his wife of 59 years, Barbara (Bullman) Young; his three sons, Brian Young of Bridgewater, Barry Young of Wantage, and Bruce Young and his wife Kristin and their children, Abby and Ian of Saratoga Springs, New York; his brother, Bruce Young and his wife Kandy of Memphis, Tennessee; and his sister, Wilma Harbin and her husband Bill of Huntsville, Alabama. Memorial services will be held at 11 a.m. on Saturday, September 14, 2019 at the First Presbyterian Church of Sussex, 21 Unionville Avenue, Sussex, NJ 07461. Friends may pay their respects to the family one hour prior to the service from 10 a.m. to 11 a.m. at the church. In lieu of flowers, the family requests that memorial donations may be made in W. Wayne Young’s memory to the First Presbyterian Church of Sussex. Funeral arrangements have been entrusted to the Pinkel Funeral Home, 31 Bank Street (Route 23), Sussex. Online condolences may be offered to the family at www.pinkelfuneralhome.com.

The family of W. Wayne Young created this Life Tributes page to make it easy to share your memories.

Send flowers to the Young family.