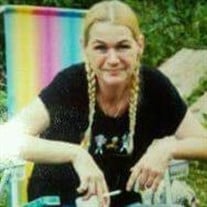 Sussex - Virginia M. Muller, age 60, unexpectedly passed away on Thursday, January 5, 2017 at Newton Memorial Hospital. Born in Manhattan, New York to the late Alfred and Mary (Cummings) Muller, Gini grew up there and moved to Sussex County 45 years ago. She had been employed by Capitol Care in Stanhope as a Direct Support Professional for the past ten years and also for SCARC for the past eight years. In the past, Gini had been employed at the former Playboy Club, Morley's Shirt Company, Lorenzo's Pizza, Sussex Inn, Sullivan's Restaurant, Hampton Diner, Kentucky Fried Chicken, and McDonald's. She loved animals and volunteered at the Wantage Pound. Gini spent most of her time enjoying her kids, grandchildren, and fur children. Besides her parents, she was predeceased by her brother, John Muller in 2012. She is survived by her two daughters, Kristen Walsh of Wantage and Alizabeth Muller of North Carolina; her sister, Dorothy Trout of New City, New York; her six grandchildren, William Muller, Cara Muller, Kayt Hodgson, Thomas Walsh, Brandon Walsh, and Tyrell Walsh, Jr.; her four great grandchildren, Anastasia, Izabella, Dylan, and Hunter; her nieces and nephews, Patricia Trout, Susan Trout Imhof, James Peter "JP" Trout, Christopher Trout, and John Michael Muller; numerous great nieces and nephews; and her grandpuppies and grand kitties. Funeral services will be held at 4:30 p.m. on Sunday, January 8, 2017 at the Pinkel Funeral Home, 31 Bank Street (Route 23), Sussex. Friends may pay their respects to the family on Sunday before the service from 1 p.m. to 4:30 p.m. at the funeral home. Private cremation services were held at the convenience of the family. In lieu of flowers, the family respects that memorial donations may be made to the Wantage Animal Shelter, 888 Route 23, Wantage, N.J. 07461. Online condolences may be offered to the family at www.pinkelfuneralhome.com

The family of Virginia M Muller created this Life Tributes page to make it easy to share your memories.

Send flowers to the Muller family.