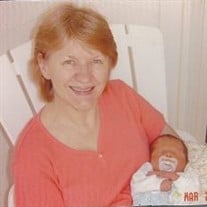 Sussex - Virginia Marie Morse, age 74, passed away on Wednesday, September 27, 2017 at MD Anderson Cancer Center in Houston, Texas. Born and raised in Elizabeth, Mrs. Morse graduated from Battin High School in Elizabeth in 1960 and Essex College of Business in Newark in 1962. Virginia worked at Union Carbide in Newark, Manville High School in Manville, and Ortho Pharmaceutical Corporation in Raritan until her retirement in 1991. She lived in Manville for many years, then Clinton and Whitehouse. Virginia and her husband became full-time RVer’s after his retirement in 2001, and spent their summers in Sussex and winters in Destin, Florida. She was predeceased by her mother, Stella R. Kazanecki Sabolowski; her father, Edward D. Savickas; and her brother, Joseph E. Savickas. She is survived by her loving husband of 39 years, James R. Morse, Sr.; her daughter, Noreen Quinn DeRocha and her husband Christopher of Destin, Florida; her son, James R. Morse, Jr. and his wife Susan of Louisville, Tennessee; and her grandchildren, Christine and Christian DeRocha of Destin, Florida. Funeral services will be held at 6 p.m. at the Pinkel Funeral Home, 31 Bank Street (Route 23), Sussex on Friday, October 6, 2017. Friends may pay their respects to the family on Friday prior to the service from 4 to 6 p.m. at the funeral home. Private entombment services will be held at the convenience of the family at Restland Memorial Park in East Hanover. In lieu of flowers, the family requests that memorial donations may be made to St. Jude Children’s Research Hospital, 501 St. Jude Place, Memphis, TN 38105 or to Office of Development Shriners Hospitals for Children, 2900 Rocky Point Dr., Tampa, FL 33607. Online condolences may be offered to the family on www.pinkelfuneralhome.com

The family of Virginia M. Morse created this Life Tributes page to make it easy to share your memories.

Send flowers to the Morse family.