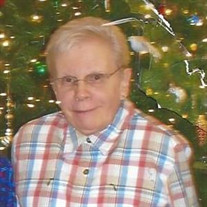 Wantage - Violet "Vi" Grabowski, age 78, passed away on Thursday, January 7, 2016 at her residence. She was born in The Bronx and lived in Staten Island, New York. Upon graduating high school, Mrs. Grabowski entered a convent in Missouri. She decided not to receive her final vows and met the love of her life, Louis "Ralph" Grabowski. They soon married and they lovingly raised four children together. She had been employed at the former Playboy Club then the Americana in McAfee and recently retired from Andover Subacute and Rehabilitation Center at the age of 73. She had worked there for over 20 years as a Recreation Aide and was the person responsible for starting the religous programs for all denominations at the nursing home. Mrs. Grabowski was a member of St. Monica R.C. Church in Sussex. She was predeceased by her husband of 51 years, Louis "Ralph" Grabowski on September 7, 2012; her son, Dennis Wayne Grabowski; and her daughter, Karen Grabowski. Mrs. Grabowski is survived by her daughter, Lori Teets and her fiance Anthony of Wantage; her son, Lawrence "Larry" Grabowski and his wife Christina of Little Egg Harbor; and her three grandchildren, Justin Leyman, Jared O'Connor, and Ashley Teets. Funeral services will be held at 9:30 a.m. on Monday, January 11, 2016 from the Pinkel Funeral Home, 31 Bank Street (Route 23), Sussex. Mass of Christian Burial will follow at 10 a.m. at St. Monica R.C. Church, 33 Unionville Avenue, Sussex. Entombment will be at the Mausoleum at Immaculate Conception Cemetery in Franklin. Friends may pay their respects to the family on Sunday, January 10, 2015 from 4 - 7 p.m. at the funeral home. In lieu of flowers, the family requests that memorial donations may be made in Violet's memory to Compassionate Care Hospice, 350 Sparta Avenue, Sparta, NJ 07871. Online condolences may be offered to the family at www.pinkelfuneralhome.com

Wantage - Violet "Vi" Grabowski, age 78, passed away on Thursday, January 7, 2016 at her residence. She was born in The Bronx and lived in Staten Island, New York. Upon graduating high school, Mrs. Grabowski entered a convent in Missouri.... View Obituary & Service Information

The family of Violet "Vi" Grabowski created this Life Tributes page to make it easy to share your memories.

Send flowers to the Grabowski family.