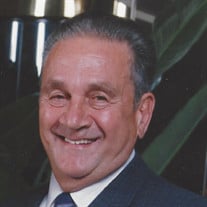 Wantage - Vincent Bassani, age 88, unexpectedly passed away on Saturday, April 9, 2016 at Newton Medical Center. Born and raised in Moonachie to the late Vincenzo and Mary (Nerone) Bassani, he graduated from East Rutherford High School and served in the United States Navy during World War II. Mr. Bassani moved to Sussex County in 1976 and had been a self-employed painting contractor, owning and operating Bassani Painting. In addition to his parents, he was predeceased by his wife of 61 years, Bertha on September 17, 2010. Mr. Bassani is survived by his four sons, Peter Bassani and his wife Diane of Hawley, PA, Ronald Bassani of Wantage, Vincent Bassani and his wife Belinda of Wantage, and Donald Bassani and his wife Tanya of Wantage; his daughter, Michelle Bassani McKenney of Sussex; his brother, John Bassani of Toms River; his three sisters, Angie Bittman of New Jersey, Margie Riggs of California, and Mary Lou Brigley of Pompton Plains; eleven grandchildren and one great granddaughter. Funeral services will be held at 11 a.m. on Wednesday, April 13, 2016 at the Pinkel Funeral Home, 31 Bank Street (Route 23), Sussex. Interment will follow at Clove Cemetery. Friends may pay their respects to the family on Tuesday, April 12, 2016 from 5 p.m. to 8 p.m. at the funeral home. Online condolences may be offered to the family at www.pinkelfuneralhome.com

The family of Vincent Bassani created this Life Tributes page to make it easy to share your memories.

Send flowers to the Bassani family.