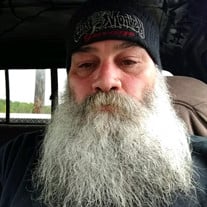 Wantage - Tucher L. DeGroat, age 52, unexpectedly passed away on Sunday, May 12, 2019 at his residence. Born and raised in Sussex, Tucher lived in Arizona for several years before moving back to Sussex County twenty years ago. He was a graduate of High Point Regional High School and participated in wrestling and football. Tucher was known for his wrestling ability and was top in the county. He still supported the school’s wrestling and attended matches when he could. He was the owner and operator of Tucher DeGroat Specialized Hauling and also enjoyed welding. Tucher loved to have fun; especially with his grandson, Kaleb, but always put the needs of others before his own. He also enjoyed tractor pulling. He was predeceased by his mother, Patri (Guinaud) Rhinesmith; his paternal grandfather, Willard “Bill’ H. DeGroat; and his maternal grandparents, Leon and Barbara Guinaud. Tucher is survived by his girlfriend of 25 years, Laurie Guadagno of Montague; his grandson, Kaleb Barretto of Montague; his son, James Lee Bush of Arizona; his father, Willard “Hap” E. DeGroat and his wife Sherry of Westtown, New York; his sisters, Tammy Decker and her companion, Larry of Cuddlebackville, New York; Hope Decker and her husband William of Westtown, New York, Tara Johnson of Ocala, Florida, and Marlene Smith and her husband John of Wantage; his paternal grandmother, Eileen (Blackmore) DeGroat of the Plumsock section of Wantage; his step-father, Harold Rhinesmith of Florida; and many nieces and nephews. Memorial services will be held at 3 p.m. on Saturday, May 25, 2019 at Sussex Fire Department, 25 Loomis Avenue, Sussex. Friends may pay their respects to the family one hour prior to the service from 2 p.m. to 3 p.m. on Saturday. Private cremation services have been entrusted to the Pinkel Funeral Home, 31 Bank Street (Route 23), Sussex. In lieu of flowers, the family requests that memorial donations may be made in Tucher’s memory to High Point Wrestling, P.O. Box 699, Branchville, NJ 07826. Online condolences may be offered to the family at www.pinkelfuneralhome.com.

Wantage - Tucher L. DeGroat, age 52, unexpectedly passed away on Sunday, May 12, 2019 at his residence. Born and raised in Sussex, Tucher lived in Arizona for several years before moving back to Sussex County twenty years ago. He was a graduate... View Obituary & Service Information

The family of Tucher L. DeGroat created this Life Tributes page to make it easy to share your memories.

Send flowers to the DeGroat family.