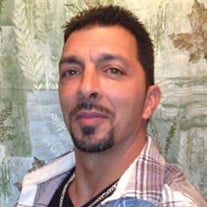 Vernon - Tony J. Alexander, Sr., age 48, unexpectedly passed away on Thursday, May 3, 2018 from injuries sustained in a motorcycle accident. Born and raised in Hackensack, Tony lived in Teaneck before moving to Sussex County in 1986. He was the Assistant Supervisor for the Vernon Department of Public Works since 2001. Tony recently remodeled and built the Vernon Deli and owned a landscaping company, working with his son, Tony and Dylan, who was like a son to him. He was a former member of the Hamburg Fire Department, involved with the Friday Night Mix Bowling League in Warwick, New York, part of the Team "Wild Thing" Demo Derby, and was Chief of the pit crew. Tony was in his first Derby this summer at the Sussex County Fair Grounds. Tony is survived by his son, Tony, Jr. of Sussex; his daughter, Christina Alexander and her boyfriend Cody of Vernon; his parents, Sue Ann and Chuck Fehskens of Hamburg; his brothers, Joseph Alexander of California and James Alexander of Pittsburg, PA; his sister, Brenda Flick of Bradenton, Florida; his girlfriend, Brenda Kaloyerakis of Vernon; his loyal companion, Chevy; and many aunts, uncles, cousins, nieces and nephews. Memorial services will be held at 6 p.m. on Friday, May 11, 2018 at the Pinkel Funeral Home, 31 Bank Street (Route 23), Sussex. Friends may pay their respects to the family on Friday from 3 - 6 p.m. at the funeral home prior to the service. Private cremation services have been held at the convenience of the family. In lieu of flowers, the family requests that memorial donations may be made in Tony's memory to help defray the funeral costs. Online condolences may be offered to the family at www.pinkelfuneralhome.com

Vernon - Tony J. Alexander, Sr., age 48, unexpectedly passed away on Thursday, May 3, 2018 from injuries sustained in a motorcycle accident. Born and raised in Hackensack, Tony lived in Teaneck before moving to Sussex County in 1986. He was... View Obituary & Service Information

The family of Tony J. Alexander Sr. created this Life Tributes page to make it easy to share your memories.

Send flowers to the Alexander family.