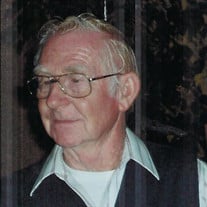 Sussex - Theodore P. Titman, age 78, passed away on Monday, November 19, 2018 at his residence while surrounded by his loving family. Ted was born on February 8, 1940 in Paterson to the late John and Helen (Queenan) Titman. As an infant, his family moved to Sussex County to farm. They moved to various farms and eventually bought the John L. Clark farm on Cemetery Road in Wantage, where they milked cows and raised pheasants. Ted was given the nickname of “Skipper” by his father, because he did not walk from place to place, but ran. In 1961, Ted married the love of his life, Virginia Van Etten and they married on September 9, 1961. Ted’s employment included working on the Owen Aukema farm, then George Fetzer Trucking for eleven years, and Richard Dawn Trucking before owning an operating Titman Trucking, Inc., a car carrier business for 27 years. He retired in 2006. Ted enjoyed his 2 to 3 weeks of vacation with his family every year. Some of the places he visited included; Yellow Stone National Park, the caves in Kentucky, Virginia Beach, truck shows, and various events. On their 35th wedding anniversary, Virginia and Ted went to Nashville and stayed at the Music City Sheraton to look on the conservatory. The couple cruised on ten different ships together. Ted was an avid hunter and as a youth, Ted hunted foxes with his brother, Clarence. One summer, Ted and Dick Bootsma shot 174 wood chucks at the Kuperus Meadows farm. Ted’s handle on the CB was Teddy Bear and he found that the CB was a helpful navigating tool and way to connect with others when he was away for days. He is survived by his wife, Virginia V.; his two sons, Thomas Michael and his wife Joy of Tannersville, PA and Theodore John and his wife Kim of Dingmans Ferry, Pa; his daughter, Peggy Bozsik and her husband Brandon of Hamburg; three grandchildren, Michael, Theodore “TJ” and Kohl Anthony; and his great grandchildren, James and Corbin. Ted loved his wife and family and he would like to say to them, “I am proud and thankful for every one of you.” Funeral service will be held at 10 a.m. on Saturday, November 24, 2018 at the Pinkel Funeral Home, 31 Bank Street (Route 23), Sussex. Burial will be private for the family immediately after the funeral service. Friends may pay their respects to the family on Friday, November 23, 2018 from 7 p.m. to 9 p.m. In lieu of flowers, the family requests that memorials donations may be made in Theodore P. Titman’s memory to the Sussex Christian Church, 49 Unionville Avenue, Sussex, NJ 07461 or to Karen Ann Quinlan Center of Hope Hospice, 99 Sparta Avenue, Newton, NJ 07860. Online condolences may be offered to the family at www.pinkelfuneralhome.com

Sussex - Theodore P. Titman, age 78, passed away on Monday, November 19, 2018 at his residence while surrounded by his loving family. Ted was born on February 8, 1940 in Paterson to the late John and Helen (Queenan) Titman. As an infant, his... View Obituary & Service Information

The family of Theodore P. Titman created this Life Tributes page to make it easy to share your memories.

Send flowers to the Titman family.