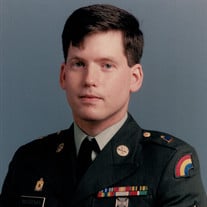 Wantage - Stephen McGoonan, age 45, passed away peacefully on Wednesday, October 11, 2017 at Karen Ann Quinlan Home for Hospice in Fredon. Born in Englewood, Steve graduated from High Point Regional High School in 1990 and has lived in Sussex County all of his life. He had enlisted in the United States Army on April 10, 1990 and served in Afghanistan from December 19, 2007 until September 18, 2008. He retired as a Sergeant First Class from the New Jersey Army National Guard. Steve had been employed as an elevator constructor for Otis Elevator Company. He was predeceased by his mother, Dona McGoonan; his maternal grandparents, Pat and Fred McAliece; and his paternal grandfather, Stephen McGoonan, Sr.. Steve is survived by his parents, Stephen and Joy McGoonan of Wantage; his brothers, Jim McGoonan and his wife Amanda of Wantage and Sean McGoonan of Hardyston; his paternal grandmother, Gladys McGoonan of Wantage; his fiancé, Maureen Las and her daughter Olivia; his niece, Dona McGoonan; and his cousins, Lori, Keith and TJ Fedirko and Tammy, Jim and Megan Hobar. Funeral services will be held at 10:30 a.m. on Tuesday, October 17, 2017 at the Pinkel Funeral Home, 31 Bank Street (Route 23), Sussex. Interment and military honors will follow at the Northern New Jersey Veterans Memorial Cemetery in Sparta. Friends may pay their respects to the family on Monday from 5 to 8 p.m. at the funeral home. In lieu of flowers, the family requests that memorial donations be made to the Northern NJ Veterans Memorial Cemetery, P.O. Box 82, Sparta, New Jersey 07871. Online condolences may be offered to the family on www.pinkelfuneralhome.com

The family of Stephen McGoonan Jr. created this Life Tributes page to make it easy to share your memories.

Send flowers to the McGoonan family.