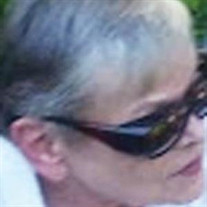 Wantage - Sherry L. Stewart, age 74, peacefully passed away on Thursday, September 6, 2018 at her residence. Born in Greenville, New York to the late Harold and Elsie V. (Rude) Rome, Sherry had graduated from Sussex High School in 1962 and attended Rider College. She had been a resident of Sussex County all of her life. Sherry started her banking career in 1967 at Farmer’s National Bank in Sussex, worked at Orange County Trust and then National Community Bank in Sussex. She continued to work at the Sussex branch and then transferred to Wantage, working for Bank of New York and retiring from Chase Bank in 2010. Sherry also worked with her husband on the family dairy farm in Wantage all of her life. She was predeceased by her husband, Russell V. Stewart on February 17, 2018 and her brother, Andrew Rome in 2014. She is survived by her daughter, Kimberly Cortright of Wantage and her in-laws, James Stewart and his wife Mary Lou of Lockport, New York, John Stewart of Port Jervis, New York, Lillian Doty and her husband Harry of Westtown, New York, Barbara Schaffer and her husband Wally of Mahopac, New York, Genevieve Rome of Wantage, and Cheryl Hugel of Ocala, Florida; and several cousins, nieces and nephews. To honor Sherry’s wishes, there will be no services and private cremation services have been held at the convenience of the family. Funeral arrangements have been entrusted to the Pinkel Funeral Home, 31 Bank Street (Route 23), Sussex. Online condolences may be offered to the family at www.pinkelfuneralhome.com

The family of Sherry L. Stewert created this Life Tributes page to make it easy to share your memories.

Send flowers to the Stewert family.