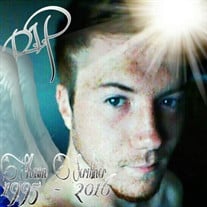 Newton - Shawn D. Scribner, age 20, unexpectedly passed away on Monday, May 30, 2016 at Newton Medical Center. Born in Morristown, Shawn had lived in Sussex County for most of his life. He owned and operated his own flooring contracting company, Shawn D. Scribner Contractor Company. He was predeceased by his grandmother, Karen Lambert Fisher in 2015 and a sister, Serenity Scribner in 2015. He is survived by his mother, Stephanie Lambert of Newton; his father, William Scribner of Old Forge, PA; his brothers and sisters, Brett, Justin, and Allyssa Scribner of Newton, Hailey Babcock of Newton, Jenna Semmel of Burlington, Jon Michael of Berkeley Heights, Wynona of Garwood,William and Deston of Bloomingdale, Mystyna of Wilkes Barre, PA, Angel of Endwell, New York, Raven, Jaikob, and Mariya of Elmira, New York, and Camaron of Old Forge, PA; his maternal grandfather, Ken Powers of Swartswood; his maternal step-grandfather, Allen Fisher of Franklin; his paternal grandparents, Ronald Scribner of Old Forge, PA and Jacqueline Montgomery of Wayne; and his uncles’s, Christopher and Patrick Fisher both of Franklin. Funeral services will be held at 11 a.m. on Friday, June 3, 2016 at the Pinkel Funeral Home, 31 Bank Street (Route 23), Sussex. Private cremation services will be held and an Interment at Sparta Presbyterian Methodist Cemetery will be held on Saturday, June 4, 2016 Friends may pay their respects to the family on Thursday, June 2, 2016 from 5 p.m. to 8 p.m. at the funeral home. In lieu of flowers, the family requests that memorial donations may be made to the family or to the funeral home to help defray the costs of the funeral expenses. Online condolences may be offered to the family at www.pinkelfuneralhome.com. “Shawn lived life the way he wanted to live it and he thanks everyone for being a part of his life and sharing the good times with him.” THE FAMILY REQUESTS THAT ANYONE WHO IS COMING TO PAY THEIR RESPECTS TO THE FAMILY AND SAY GOODBYE TO SHAWN THAT THEY COME DRESSED IN HIS FAVORITE COLORS: RED, YELLOW, AND GREEN

Newton - Shawn D. Scribner, age 20, unexpectedly passed away on Monday, May 30, 2016 at Newton Medical Center. Born in Morristown, Shawn had lived in Sussex County for most of his life. He owned and operated his own flooring contracting company,... View Obituary & Service Information

The family of Shawn Damien Scribner created this Life Tributes page to make it easy to share your memories.

Send flowers to the Scribner family.