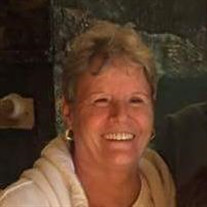 Wantage - Sharon (Schultz) Smith, age 62, peacefully passed away while surrounded by her loving family on Sunday, April 2, 2017 at Morristown Medical Center after a long illness. Born in Brooklyn, New York on March 27, 1955 to the late James and Dorothy Schultz, Sharon has lived in Wantage for most of her life. She was a homemaker for many years and worked for the Sussex-Wantage Regional School District as a teacher’s assistant from November 1, 1996 until her retirement on July 1, 2012. Sharon was an active Auxiliary member of the American Legion Post 213 of Sussex. She was predeceased by her niece, Stacey Hopkins of Albany, Georgia on March 4, 2013 and a brother, James Schultz on August 27, 1999. Sharon is survived by her husband, Dennis Smith; her two sons, Brian Yanecko and his wife Lisa of Wantage and Kevin Yanecko and his wife Jessica of Branchville; her step-son, Dennis Smith and his wife Lee Ann of Wantage; her sisters, Darlene Taylor and her husband Marvin of Albany, Georgia, her twin sister, Karen Conklin and her husband Ernest of Wantage, and Dorothy “Dee” Pakestein and her husband Charles of Wantage, her brother, Brooks Schultz and his wife Karen of Dingmans Ferry, PA; her step-brother, Jamie Schultz of Pocono Lakes, PA; her sister-in-law, Lisa Schultz of Bushkill, PA; her grandchildren, Cloey and Charles Yanecko and Christian and Isabella Smith; and several nieces and nephews. A memorial gathering will be held on Saturday, April 15, 2017 at 1 p.m. at the Sussex Fire Department, 25 Loomis Avenue, Sussex with Pastor Craig Spears, officiating. Arrangements have been entrusted to the Pinkel Funeral Home, 31 Bank Street (Route 23), Sussex. In lieu of flowers, the family requests that memorial donations may be made to The American Legion Post 213, P.O. Box 447, Sussex, NJ 07461 or to the Wantage United Methodist Church, 199 Libertyville Road, Wantage, NJ 07461. Online condolences may be offered to the family at www.pinkelfuneralhome.com. “God saw you getting tired And a cure was not to be So he put his arms around you And whispered “come to me.” With tearful eyes we watched you As you slowly slipped away And though we loved you dearly We couldn’t make you stay. Your golden heart stopped beating Your tired hand puts to rest God broke our hearts to prove to us He only takes the best." By Frances and Kathleen Coelho

Wantage - Sharon (Schultz) Smith, age 62, peacefully passed away while surrounded by her loving family on Sunday, April 2, 2017 at Morristown Medical Center after a long illness. Born in Brooklyn, New York on March 27, 1955 to the late James... View Obituary & Service Information

The family of Sharon Smith created this Life Tributes page to make it easy to share your memories.

Send flowers to the Smith family.