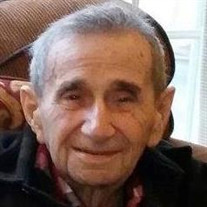 Hackettstown - Samuel "Sonny" P. Padula, age 89, went home to be with the Lord while surrounded by his loving family on Sunday, April 30, 2017. He left a beautiful legacy of love for family, country, and faith in God. Born in Paterson to the late Anthony and Christine (Barbieri) Padula, Sam lived in Pompton Lakes before moving to Sussex County in 1994. He had served in the United States Navy during World War II. Sam was a member of St. Jude The Apostle Church in Hamburg, the St. Jude Senior Group, served as the Treasurer of Indian Fields Homeowners Association, Third Degree Member of the Knights of Columbus in Pompton Lakes and served on the Auxiliary Police while living in Pompton Lakes. He was predeceased by his brother, Richard Padula and his sister, Dolly Wolff. Sam is survived by his loving wife of 68 years, Josephine Padula; his two sons, Allen Padula and his wife Kathy of Newton and Ronald Padula and his wife Dana of Georgetown, Texas; three daughters, Janice Mitchell and her husband Robert, Jr. of Vernon, Lori Wall and her husband Chuck of Doylestown, PA, and Marie Janssen and her husband Bill of Long Valley; his brother, Anthony Padula, Jr. and his wife Jenny of Manahawkin; nine grandchildren, Josiah Bump, Canaan Bump, Katie Jo Huffman, Grace Padula, Robert Mitchell, III, Thomas Mitchell, Erica Meakem, Maya Janssen, and Ethan Janssen; and nine great grandchildren. Mass of Christian Burial will be held at 11 a.m. on Thursday, May 4, 2017 at St. Jude The Apostle Church, 4-24 Beaver Run Road, Hamburg. Entombment will follow at Immaculate Conception Cemetery Mausoleum. Friends may pay their respects to the family on Wednesday, May 3, 2017 from 4 p.m. to 8 p.m. at the Pinkel Funeral Home, 31 Bank Street (Route 23), Sussex. In lieu of flowers, the family requests that memorial donations may be made to Veterans of America, P.O. Box 67, Beverly, KS 67423 or to the Alzheimer's Association, 225 N. Michigan Avenue, Fl. 17, Chicago, IL 60601. Online condolences may be offered to the family at www.pinkelfuneralhome.com

Hackettstown - Samuel "Sonny" P. Padula, age 89, went home to be with the Lord while surrounded by his loving family on Sunday, April 30, 2017. He left a beautiful legacy of love for family, country, and faith in God. Born in Paterson to the... View Obituary & Service Information

The family of Samuel "Sonny" P. Padula created this Life Tributes page to make it easy to share your memories.

Send flowers to the Padula family.