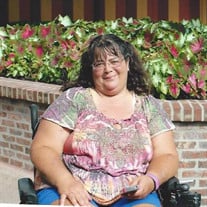 Wantage - Samantha "Sammy" Ann (nee Bonilla) Janos, age 45, passed away on Friday, December 11, 2015 at Morristown Medical Center. Born on February 26, 1970 in Jersey City, Sammy was raised in Jersey City until she moved to Sussex County in 1991. Before she had started her family, Sammy had been been a long term employee for Russ Berrie in Oakland. She is survived by her husband, soul mate, and best friend of 21 years, Bill; her son, Elias Pete Janos; her daughter, Elizabeth Dena Janos; her parents, Pete and Bernice Bonilla of Highland Lakes; three sisters, Christine Ribaudo and her husband Adam of Roxbury, Amanda Peppard and her husband John of Huntington, Long Island, New York, and Nicole Stalter and her husband Dan of Highland Lakes; her brother Jesse Bonilla and his girlfriend Megan of Blooomfield; her mother and father-in-law, Ginny and Joe Tomala of Wantage; and many aunts, uncles, and cousins. Sammy was a definite animal lover and will be sorely missed by her two dogs, Sally and Buster; her cat, Rat Fink; and of course, her two ducks, Charlie and Chester. Sammy's favorite thing in the world to do was supporting her children in their sporting events. Sammy could be seen zipping around the fields in Wantage in her wheelchair while cheering them on along with her husband, Bill. She was also an antique car enthusiast and owner of a 1968 Camaro. She never missed a spring or Fall at Englishtown Raceway Park Antique Car Show and Swap Meet. This became a yearly ritual with her dad and family. Mass of Christian Burial will be held on Wednesday, December 16, 2015 at 10 a.m. at Our Lady of Fatima Church, 184 Breakneck Road, Highland Lakes. Interment will follow at Clove Cemetery in Wantage. Friends may pay their respects to the family on Tuesday, December 15, 2015 from 2-4 p.m. and 7-9 p.m. at the Pinkel Funeral Home, 31 Bank Street (Route 23), Sussex. In lieu of flowers, the family requests that memorial donations may be made to a fund that will be set up in the children's names for their future education. Donations may be sent to the family c/o Pinkel Funeral Home, 31 Bank Street, Sussex, New Jersey 07461. Online condolences may be offered to the family at www.pinkelfuneralhome.com

The family of Samantha Ann Janos created this Life Tributes page to make it easy to share your memories.

Send flowers to the Janos family.