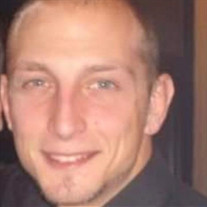 Franklin - Ryan M. Manca, age 37, suddenly passed away on Friday, October 18, 2019. Ryan was born on March 19, 1982 in Newton and had lived in West Caldwell before residing in Franklin. Ryan graduated from Wallkill Valley Regional High School in 2000. He worked as a roofer, food distributor and various other jobs. Ryan was a funny, charismatic, intelligent, and an all around good hearted person. He loved music, sports cars, video games, and was an avid sports fan. He enjoyed spending time with his niece, Addy and his dog, Kodi. He always went out of his way to help others, had a contagious laugh and a lasting impression on others. He was predeceased by his brother, Michael Manca, Jr. as well as his grandparents. Ryan is survived by his mother, Dorothy Stoll and his step-father, Asher Snook of Franklin; his father, Michael Manca, Sr. and step-mother, Lisa Runo of Netcong; his sister, Michele and her husband Michael DelGais of Hamilton; his brother, John and his wife Jean Gauthier of Franklin; his brother, Scott and his wife Donna Gauthier of Georgia; his brother, Jason Manca and his partner Emily of Queens, NY; sister, Melissa Stoll and her partner Marc Smolinski and their daughter, Adalyn of Montague; his sister, Lorrie and her husband David Stembridge of Georgia; his sister, Renee Manca of Boonton; his brother, Joey Manca and his partner Kalin of Hopatcong; his sister, Libbie Manca and her partner Dean of Netcong; his sister, Victoria Manca and her partner Sage of PA; his step-brothers, Aaren Snook of Alabama and Allen Snook of PA; and his uncle, Bill Brixius of West Caldwell. Memorial services will be held at 8 p.m. on Tuesday, October 22, 2019 at the Pinkel Funeral Home, 31 Bank Street (Route 23), Sussex. Friends may pay their respects to the family two hours prior to the funeral service from 6 p.m. to 8 p.m. at the funeral home. Private cremation services have been held at the convenience of the family. In lieu of flowers, the family requests that memorial donations be made to the family so that they can give to Ryan’s favorite charities. Online condolences may be offered to the family at www.pinkelfuneralhome.com

The family of Ryan M. Manca created this Life Tributes page to make it easy to share your memories.

Send flowers to the Manca family.