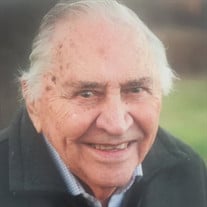 Wantage - Rudolph W. Ostrowski, age 95, peacefully passed away on Sunday, September 15, 2019 at Barn Hill Care Center in Newton while surrounded by his loving family. Born and raised in Elizabeth to the late Walter and Victoria (Romanik) Ostrowski, he had lived in Clifton before moving to Sussex County in 1968. Mr. Ostrowski had served in the United States Army during World War II, serving in the 98th Reconnaissance Troop in the 98th Infantry Division. He was a Real Estate Broker, owning and operating Glenn Realty in Clifton and Franklin before his retirement. Mr. Ostrowski was a member of St. Jude The Apostle Church in Hamburg, a founding member and past Treasurer of the Polish Falcons, and a founding member of the Sussex-Wantage Wrestling Team. Besides his parents, he was predeceased by his wife of 56 years, Dolores J. (Gletow) Ostrowski; his brother, Edward James and his three sisters, Mae Garwacki, Julia Kumor, and Mary Thomas. Mr. Ostrowski is survived by his two sons, Glenn and his wife Marina of Denver, Colorado and Gregg and his wife Lisa of Branchville; his three daughters, Linda J. Space and her husband Eric of Wantage, Lois J. Smith and her husband Richard of Goshen, New York, and Leigh A. Rogalo of Boonton Twp.; ten grandchildren, Meghan Jaust and her husband Thomas, Mandy Jaust and her husband Matthew, Eric Space and his wife Stephanie, Alexander and Victoria Smith, Jocelyn and Lucas Rogalo, Dmitry and Nikolai Ostrowski and Taylor Ostrowski; and six great grandchildren, Timothy Space and Colton, Kirsten, Thomas, Greenlee and Darbee Jaust. Mass of Christian Burial will be held at 9:30 a.m. on Thursday, September 19, 2019 at St. Jude The Apostle Church in Hamburg. Interment to follow at Immaculate Conception Cemetery. Friends may pay their respects to the family on Wednesday from 2-4 and 7-9 p.m. at the Pinkel Funeral Home, 31 Bank Street (Route 23), Sussex. The family requests that memorial donations may be made in Rudolph Ostrowski’s memory to the Covenant House, 5 Penn Plaza, NY, NY 10001-1810 (attn: Sandy Latchman). Online condolences may be offered to the family at www.pinkelfuneralhome.com.

Wantage - Rudolph W. Ostrowski, age 95, peacefully passed away on Sunday, September 15, 2019 at Barn Hill Care Center in Newton while surrounded by his loving family. Born and raised in Elizabeth to the late Walter and Victoria (Romanik)... View Obituary & Service Information

The family of Rudolph W. Ostrowski created this Life Tributes page to make it easy to share your memories.

Send flowers to the Ostrowski family.