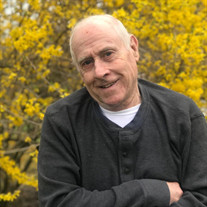 Wantage—Ronald “Ronnie” Clark Howell, age 83, of Wantage, passed away peacefully in his home surrounded by his loving wife and family by his side on Tuesday, March 24, 2020 after a long illness. Born at Alexander Linn Hospital in Sussex, New Jersey on February 23, 1937 to the late Mildred Haggerty Howell Rohel and Leon Clark Howell, Ronnie was a lifelong resident of Wantage Township. After the loss of his father, at the young age of 9, he worked with his grandfather on the family farm that taught him a lifelong work ethic. His mother later remarried Roy G. Rohel, owner of Tri-State Supply and Gas, where he made a transition from farm life to a service man. He became familiar with the family business and was well known by all of his customers in the Tri-State region. At the age of 19, Ronnie met the love of his life, Rayna Price and later married on October 4, 1958. They celebrated their 61st wedding Anniversary with many family and friends this past June. They had four beautiful daughters; Debbie Howell of Wantage, Tammy Kuperus and her husband Thomas of Hampstead, NC, Cheryl Cecchini and her husband Michael of Wantage, and the late Donna Howell Little. He had 14 grandchildren; Kristen(Jim) Carruci, Lauren (Ernie) Conklin, Derek (Renata) Kuperus, Danielle (Joshia) Whitten, Meghan (Paul) Putera, Heather (Patrick) Freeland, Jenna (Kyle) Bruffy, Michael (Alissa) Cecchini Jr., Justin Kuperus, Erin (Matt)Washer, Jesse (Caitlin) Kuperus, Brianna (Dan) Caouette, Hope Kuperus, and Mackenzie Ayers. He was also blessed with 22 great grandchildren with one forth coming in the Fall. Ronnie was so very proud to be blessed with a large family, and treasured each and every one. He is also survived by his brother; Wayne Howell and his wife Judy of Wantage; his sister, Elaine Eberhardt and her husband Frank of Hampton; his brother, Roy R. Rohel and his wife Cindy of Frankford; and his sister, Margie Borner and her husband Edward of Cape Coral FL; and many nieces, nephews and cousins. Ronald was a graduate of Sussex High School class of 1955. He worked for Tri-State Supply for many years and was later Vice President of Tri-States True Value until his retirement in 2000. He was well known and served on the Wantage Planning Board and Township Committee, serving as Mayor several times. He took this position very seriously and wanted the very best for the people of Wantage. He served as a Board Member of the National Bank of Sussex County and on the Lakeland Bank Advisory Board. He was a member of the Sussex United Methodist Church. Ronnie was always willing to go the extra mile helping out his customers and family members. He exhibited his love and compassion for those less fortunate by giving to the poor, the elderly and the widowed. Ronnie’s outgoing personality and unforgettable sense of humor carried him through much adversity, throughout his life. He fought a valiant battle against Alzheimer’s disease. His lifelong motto was to “NEVER EVER GIVE UP” and “GET HER DONE.” He had an outgoing personality who always had a joke or two and his laughter was contagious and loved by all. Ronnie had a great love for the outdoors, deer hunting, wood working, ice fishing, snowmobiling and loved playing horseshoes with his neighbor. Ronnie was passionate about spending countless hours planting and pruning trees, flowers, gardening, mowing and landscaping. His yard always exemplified his love for same. The family would like to extend their deepest gratitude to both Compassionate Care Hospice of Sparta, NJ and From the Heart Elder Care of Vernon, NJ. for the loving care which was given in these past several months to Ronnie. A private funeral was held on Friday, March 27, 2020 at Clove Cemetery in Wantage, NJ with Rev. Daniel Gepford, Pastor of the Sussex United Methodist Church. All funeral arrangements were entrusted to the Pinkel Funeral Home, 31 Bank Street (Route 23), Sussex, NJ. A celebration of life will be held at a date to be determined, which will be announced in the New Jersey Herald and on the funeral home website. In lieu of flowers, the family requests that all memorial donations may be made in Ronald’s name to the Sussex United Methodist Church, 15 Bank Street, Sussex, NJ 07461. Online condolences may be offered to the family on www.pinkelfuneralhome.com

Wantage&#8212;Ronald &#8220;Ronnie&#8221; Clark Howell, age 83, of Wantage, passed away peacefully in his home surrounded by his loving wife and family by his side on Tuesday, March 24, 2020 after a long illness. Born at Alexander Linn Hospital... View Obituary & Service Information

The family of Ronald Clark Howell created this Life Tributes page to make it easy to share your memories.

Send flowers to the Howell family.