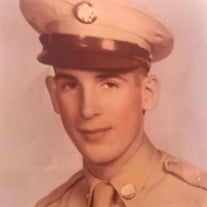 Liberty, New York - Roland L. O’Dell, Sr., age 89, passed away on Sunday, November 29, 2020 at Achieve Rehabilitation and Nursing Home in Liberty, New York. Born in Middletown, New York to the late Roy and Mildred (McIntyre) O’Dell, Roland had lived in Sussex County for most of his life. He had been employed by Ford Motor Company in Mahwah for 18 years and retired in 1980. He then became employed as an equipment operator for the County of Sussex for 10 years, retiring in 1992. He had served in the United States Army as a Sgt. during the Korean War. Mr. O’Dell was a Past Commander and member of the American Legion Post 213 in Wantage, Past Sussex County Commander, Charter Member and Lifetime Member of the Vernon VFW Post 8441, member of the Greenville VFW Post 3175, member of the First Baptist Church of Sussex, member of the Greenville Senior Club; the Slate Hill (New York) Senior Club, the Sussex Over 50 Club, member of the Sussex County Democratic Club, past leader of the Cub Scouts in Wantage Township , and member and coach of the High Point Midget Football League. Besides his parents, he was predeceased by his wife, Marion (Ogden); his son, George E. Ogden; his brother, Bim O’Dell, George O’Dell, Everette O’Dell, and Andy O’Dell. Mr. O’Dell is survived by his son, Ronnie and his wife Barbara of Middletown, New York; his brothers, Eugene and his wife Connie of Vernon and Boe O’Dell of Florida, New York; his sisters, Dorothy Krasowski of Westtown, New York, Florence Gardape of Florida, and Connie Pines of Middletown, New York; his grandchildren, Michelle Miedema and her husband Michael of Walden, New York, Kristen J. Brown and her husband Leonard of Middletown, New York, and Michael G. O’Dell of Middletown, New York; his sister-in-law, Elsie Belcher of Wantage; his great grandchildren, Travis, Audrey, Mark and Garrett Miedema, Bailey and John Brown, and Michael G. O’Dell, Jr.. Funeral services will be held at 11 a.m. on Thursday, December 3, 2020 at the Pinkel Funeral Home, 31 Bank Street (Route 23), Sussex. Interment to follow at Clove Cemetery. Friends may pay their respects to the family on Wednesday from 4 to 7 p.m. at the funeral home. In lieu of flowers, the family requests that memorial donations may be made to the American Legion Post 213, Scholarship Fund, 917 Route 23, Sussex, NJ 07461. Online condolences may be offered to the family at www.pinkelfuneralhome.com

The family of Roland L. O'Dell Sr. created this Life Tributes page to make it easy to share your memories.

Send flowers to the O'Dell family.