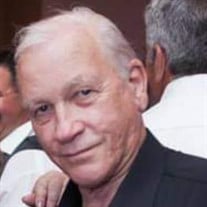 Vernon - Roger W. Gundersen, age 78, a longtime resident of Vernon, passed to his Heavenly Home on Tuesday, September 21, 2021 with his wife, Arlene and son, Roger at his side. All his children were with him virtually, wishing him Godspeed. He saw and heard them all. Born in Hackensack to the late Gunner and Emily Grabley, Roger served in the United States Army, where he served in the Military Police for 4 years in Germany. He was so proud of his country. He had been employed by Suburban Sprinklers in Elmwood Park, before he purchased the company in 1996 and retired in 2007. Roger was an accomplished roller skater at Paramus Roller Rink back in the 60's. He was also an avid bowler for many years. Everyone who was lucky enough to meet him~ LOVED him. Roger was a quiet, gentle man who would help anyone in need. He lived his life with kindness to all. Besides his parents, he was predeceased by his step-son, Daniel Forrester; his sisters, Sonja, Belinda, and Tracy; and his brother, Robert. Roger is survived by wife of 48 years, Arlene and his children, Tammy and her partner Michael, Tara Lyn and her husband Joseph Davidow, Eric and his wife Jamie, and Roger Lee and his wife Lindsey. He leaves his loving grandchildren, Austin, Skylar, Kayla, Kendall, and a grandson on the way, Joey, Madison, Elijah, Alexa, Leah, and Roger, Jr.. He also leaves a brother, Gunner and his wife Sally and a sister, Sgt. Michele Grabley. Friends may pay their respects at a “Celebration of Life” which will be held from 9 a.m. to 11 a.m. on Tuesday, September 28, 2021 at the Pinkel Funeral Home, 31 Bank Street (Route 23), Sussex. The Service will start at 11 a.m.. Interment and military honors will immediately follow at the Northern New Jersey Veterans Memorial Cemetery in Sparta. In lieu of flowers, please consider a donation in Roger W. Gundersen’s memory to St. Jude Children’s Research Hospital, 501 St. Jude Place, Memphis, TN 38105. Prayers and notes of sympathy can be sent by email to [email protected] Online condolences may be offered to the family at www.pinkelfuneralhome.com.

Vernon - Roger W. Gundersen, age 78, a longtime resident of Vernon, passed to his Heavenly Home on Tuesday, September 21, 2021 with his wife, Arlene and son, Roger at his side. All his children were with him virtually, wishing him Godspeed.... View Obituary & Service Information

The family of Roger W. Gundersen created this Life Tributes page to make it easy to share your memories.

Send flowers to the Gundersen family.