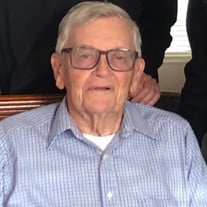 Parker, CO - Robert B. Lowe, age 92, peacefully passed away on Monday, November 23, 2020 at Pine Grove Crossing in Parker, Colorado. He was a beloved Father, Husband, Grandfather, strong, kind, compassionate and caring. Born in Ridgewood to the late Ralph G. and Isabel (Fancher)Lowe, Mr. Lowe had lived in Midland Park before moving to Sussex County in 1973. In 2014, he moved to Parker, Colorado. Mr. Lowe served in the United States Air Force during the Korean War from 1951 to 1955. He had been employed by the Ford Motor Company in Mahway, New Jersey for 21 years and retired in 1992 from Foster Wheeler Corporation in Lebanon, New Jersey where he had worked as a Logistics Rate Analyst since 1981. Mr. Lowe had been an active member of the Lafayette Federated Church and ran the Sunshine Thrift Shop with his wife, along with Bob and Krista Geery. He was a regular attendee of Joy Lutheran Church in Parker, Colorado. Besides his parents, he was predeceased by his wife, Dorothy (Pyott)Lowe in 2012; and his brother, Ralph Lowe. He is survived by his son, Daniel B. Lowe of Parker, Colorado; his daughter, Amber Alexis Lowe of Ellenton, Florida; and his three grandchildren, Jenna and Alyssa Lowe of Orange, California and Trent Lowe of Parker, Colorado. Celebration of life service will be held on Saturday, August 21, 2021 from 3 p.m. to 4:30 p.m. at the Pinkel Funeral Home, 31 Bank Street (Route 23), Sussex. Private inurnment at Clove Cemetery will be held at the convenience of the family. In lieu of flowers, memorial donations may be made in Robert Lowe's name to the Salvation Army, P.O. Box 3170, Union, NJ 07803 or to the Christian Aid Mission, P.O. Box 9037, Charlottesville, Virginia 22906. Online condolences may be offered to the family at www.PinkelFuneralHome.com

The family of Robert B. Lowe created this Life Tributes page to make it easy to share your memories.

Send flowers to the Lowe family.