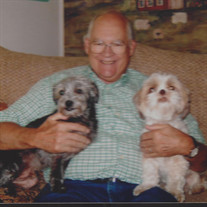 Wantage- Robert “Bob” P. Lord, age 78, entered the house of the Father on December 24, 2017, Christmas Eve with his loving wife of over 61 years by his side. Born on January 29, 1939 in New York City to the late William and Theresa Lord, Bob lived in Jersey City before moving to Sussex County 40 years ago. He proudly served his country in the National Guard for 9 years, achieving the rank of staff sergeant during the Cold War and early Vietnam Era. He was activated during the Cuban Missile Crisis. Bob was a selfless man that was devoted to God, his family, friends, and work. He operated a small farm, including a home dairy since 1977, and retired from a Wonder Bread Route Salesman job in 1994. He was a member of Our Lady of Scapular R.C. Church in Unionville, New York and the Agricultural Society. Besides his parents, Bob was predeceased by his elder siblings; Mary, Patricia, and Bill. He is survived by his wife, Maryann (La Bruno); his sons, Dave Lord and his wife Chris of Dingmans Ferry, PA and Rob Wenz and his wife Jodi of Atlanta, Georgia; his daughters, Victoria Lord of Madison, Alabama and Jennifer Lord, her partner Shane Hicks and his son, Blaine of Athens, Alabama; his sister-in-law, Bernice Lord of Jersey City; two grandchildren, Mary Lord of Buffalo, New York and Bethany Lord of St. Louis, Missouri; several nieces and nephews; his grand cats and grand dogs; and numerous family and friends. Mass of Christian Burial will be offered at 10 a.m. at Our Lady of Scapular R.C. Church, 25 Main Street, Unionville, NY on Friday, December 29, 2017. Interment will follow at Clove Cemetery, Wantage. Funeral arrangements have been entrusted to the Pinkel Funeral Home, 31 Bank Street (Route 23), Sussex. In lieu of flowers, the family requests that memorial donations may be made to Our Lady of Scapular R.C. Church, 626 County Route 22, Middletown, NY 10940. Online condolences may be offered to the family at www.pinkelfuneralhome.com.

The family of Robert P. Lord created this Life Tributes page to make it easy to share your memories.

Send flowers to the Lord family.