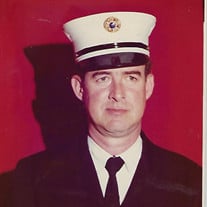 Wantage - Robert W. Hill, Sr., age 83, passed away on Monday, June 15, 2022 at his residence. Bob was born at the end of the Depression and the beginning of World War II in Hamburg on September 7, 1938 to the late Clarence Hill, Jr. and Lillian (Brown) Hill. He grew up on the family farm. Life on the farm was hard and Bob used to say if you were not quick at the dining table you did not eat. He remembered getting stabbed with a fork reaching for pancakes. Bob had a healthy appetite and could eat anyone under the table in later years. One story that he often told about life on the farm was that he, Aunt Lorna and Aunt Bev went sleigh riding together one day, one piled on top of the other and he would say that Aunt Lorna was on the bottom because he and Aunt Bev managed to jump off before Aunt Lorna went into the pond. In his younger years, the Hill’s, Longcor’s and Morrison’s met every Sunday for dinner at Grandpa Hill’s farm, which is now Woodbourne Park. After dinner, Bob and the other men went to milk the cows and then back to the house to watch “Rawhide.” He would often get the tractor and manure wagon and take the old kids for a ride. The boys would jump and run back in get on the manure wagon. Bob attended Sussex High School, where he was involved in sports during high school. He played baseball and basketball. He also met his first true love, Norma (Dexter) and they went to the senior prom together. After he graduated from Sussex High School in 1956, Bob married Norma in August 1956 at the Colesville United Methodist Church. Their first home was in Sussex on Clove Avenue and all their children were born in the former Alexander Linn Hospital. Bob got a job at Ames Rubber Corporation in Hamburg, when he was not quite 18 years old. He worked there for over 40 years, advancing to supervisor for the laboratory where he had patents for manufacturing items. After marriage, he joined the National Guard and was often gone while he was in training at Watertown, New York. The Hill’s then moved to Colesville in the late 1960's. He was a baseball coach when Bobby and the mighty Colesville team beat Sussex. Bob joined the Colesville Fire Department (later the Wantage Fire Department)and served as Chief during the 1970's. He was a lifetime member of the Wantage Fire Department. If anyone asked what Bob’s favorite pastime was, you would hear a loud response, “the RACES.” He enjoyed going to watch Uncle Junior and later Rick at the Middletown raceway. When all his kids were young, they were all over the east coast watching races. Bob enjoyed a good game of golf too. He liked to travel and the family visited many places along the east coast; such as Atlantic City, Mystic Seaport, Plymouth and Providence, Mass., Washington, DC, Niagara Falls, and Fort Ticonderoga. He and Norma enjoyed family outings with the grandchildren to Dorney Park ( a yearly sojourn with Aunt Judy and Uncle Ted, Kelly, Chris, Mickey, and TJ) and Wildwood, NJ. There were many picnic and birthday parties as well. Bob and Norma always told their children that they were from “old families.” They did not know what that meant until they did some research. Bob was vice-president of the John Rosenkrans Sons of the American Revolution and a Mayflower descendant. Besides his parents, he was predeceased by his brothers, Clarence Hill, Jr., Glendon Hill and Ronald Hill; his sisters, Beverly Longcor and Lorna Berger; and a grandson, Sean Robert Satter. Bob gave his children a good sense of ethics and independence that served them well. He was well loved by his children; Robert W. Hill, Jr. and his late wife Kirsten of Sparrowbush, New York, Robin Chandler and her husband E. Jeff of Wantage and Tammy H. Satter and her husband Arthur of Damascus, Pennsylvania; his grandchildren, Pat, Corrie, Valerie, Sean and Wayne; great-grand children, Rayden, Madison, Brianne, Felicity, and Gabriel; as well as, his many nieces and nephews. Funeral services will be held at 10 a.m. on Tuesday, June 21, 2022 at the Pinkel Funeral Home, 31 Bank Street (Route 23), Sussex. Interment to follow at Glen Cove Cemetery in Narrowsburg, New York. Friends may pay their respects to the family on Monday from 4 p.m. to 7 p.m. at the funeral home. Fireman Service and SAR Services will be held directly after the visitation at 7 p.m.. In lieu of flowers, please consider a donation in Bob’s memory to the Colesville Fire Department. Online condolences may be offered to the family at www.pinkelfuneralhome.com

Wantage - Robert W. Hill, Sr., age 83, passed away on Monday, June 15, 2022 at his residence. Bob was born at the end of the Depression and the beginning of World War II in Hamburg on September 7, 1938 to the late Clarence Hill, Jr. and Lillian... View Obituary & Service Information

The family of Robert W. Hill Sr. created this Life Tributes page to make it easy to share your memories.

Send flowers to the Hill family.