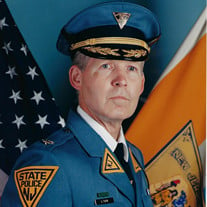 Wantage - Richard E. Touw, age 73, peacefully passed away on Thursday, January 31, 2019 at his residence while surrounded by his loving family. Born in Sussex to the late Harold E. and Hazel E. (Steckelberg) Touw, Maj. Touw was a lifelong resident of Sussex County. While serving active duty in the United States Army from 1965 to 1968, Maj. Touw was assigned to the First Infantry Division, where he earned the rank of Sergeant. He was awarded the National Defense Service Medal, Good Conduct Medal, Vietnam Service Medal with Bronze Star, and the Republic of Vietnam Campaign Medal. He was recognized by the United Services Organization for voluntary work and ultimately promoted to Sergeant and assigned as a “Provost Marshall Investigator,” covering New Mexico and western Texas. Maj. Touw joined the New Jersey State Police in 1969, where he worked at various stations in the northern part of the state; including the Garden State Parkway and New Jersey Turnpike. He was ultimately promoted to the rank of Major in 1998, the first State Police Trooper to attain the rank of Major from Sussex County. Along the way, he was assigned to the Internal Affairs Bureau (IAB) in West Trenton. In 1992, Maj. Touw organized the Cargo Theft & Robbery Unit, which was mandated by the Governor to address the State’s escalating cargo and robbery crime rate. While at this assignment, he developed a computer program that increased recovery rates by analyzing theft reports to insurance carriers and law enforcement. The crime rate was reduced by 40% in 18 months. He also developed an airlock security system for tractor-trailers. In 1995, Maj. Touw was named law enforcement officer of the year in Washington, DC by the National Cargo Security Council. He later returned to IAB and was promoted to Captain, revising the Division’s internal investigation manual and campaigning successfully to have the first female trooper assigned to the bureau. Maj. Touw subsequently transferred to the position of Investigations Officer and was promoted to Major, where he supervised and directed the activities of all criminal investigations within the State; including Narcotics, Organized Crime, Official Corruption, Internet Crimes, High Technology, Arson, Bomb, and Major Crimes Units. One of the greatest moments in his career is when he became a member of a 1982 multi-jurisdictional task force based in Boston, MA, which arrested and convicted members of the United Freedom Front, a domestic terrorist group responsible for the bombings of commercial corporate buildings, bank robberies, and the murder of Trooper Philip Lamonaco. Maj. Touw represented the New Jersey State Police as an Executive Panel Member at Northwestern University’s School of Police Staff and Command. He joined the First Presbyterian Church of Sussex in 1981, where he served as an Elder, a Deacon, and President of the Board of Trustees; chairing several committees over several decades. Maj. Touw coached t-ball and baseball for the Beemerville Recreation Association for several years and then founded the Beemerville Girls Recreation Softball League and served as a coach for many years. Maj. Touw was very proud of the house he built for his family in Wantage in 1975 and loved working on home improvements around the house and yard throughout his life. He was a devoted family man and most of all, he loved spending time with his wife, children and grandchildren. After a long day at work, he would always make time to go for a bike ride, play catch, go swimming, or go for walk with his children or dance with his wife. He was dearly loved by his wife, children, grandchildren, siblings, nieces and nephews, and friends. Besides his parents, Maj. Touw was predeceased by his brother, Harold in 2009. He is survived by his devoted wife of 46 years, Paulette (Davis); his son, Jason Touw and his wife Kristin of Goshen, New York; his daughter, Ashley Ziccardi and her husband Richard of Wantage; his brother, Dean Touw of Strousburg, Pa; his sisters, Helen Ostertag and her husband Carl of Myerstown, Pa and Henrietta Martin of Branchville; his six grandchildren, Samuel, Baylie, August, Heath, Owen, and Emmett; and several nieces and nephews, and many friends. Funeral services will be held at 11 a.m. on Tuesday, February 5, 2019 at the First Presbyterian Church of Sussex, Unionville Avenue, Sussex. Interment to follow at North Hardyston Cemetery. Friends may pay their respects to the family from 2-4 and 7-9 p.m. on Monday, February 4, 2019 at the Pinkel Funeral Home, 31 Bank Street (Route 23), Sussex.. In lieu of flowers, memorial donations may be made in Richard E. Touw's memory to the First Presbyterian Church of Sussex, 21 Unionville Avenue, Sussex, NJ 07461 or to Robert Wood Johnson University Hospital Foundation, attn: Parkinson’s Research Fund, 10 Plum Street, New Brunswick, NJ 08091. Online condolences may be offered to the family at www.pinkelfuneralhome.com

Wantage - Richard E. Touw, age 73, peacefully passed away on Thursday, January 31, 2019 at his residence while surrounded by his loving family. Born in Sussex to the late Harold E. and Hazel E. (Steckelberg) Touw, Maj. Touw was a... View Obituary & Service Information

The family of Richard E. Touw created this Life Tributes page to make it easy to share your memories.

Send flowers to the Touw family.