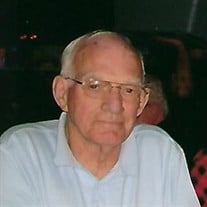 Wyckoff - Richard E. Bilney, age 93, passed away on Monday, November 5, 2018 at Heritage Manor Nursing Home in Wyckoff. Born and raised in Cranford to the late Raymond and Cecelia (DuPlain) Bilney, Mr. Bilney lived in Vernon for many years. He served in the United States Army during World War II. He landed on Omaha Beach, D-2, 90th Infantry Division and fought for Patton’s Third Army until the end of WWII. He was discharged on January 3, 1946 with rank of Master Sargent . Mr. Bilney was the owner and operator of McAfee Ski and Sport Shop from 1968 until his retirement in 1999. He enjoyed both skiing and golfing in his spare time. He was predeceased by his son, Matthew Bilney in 1993, his brother, John Bilney, and his wife Minnie Gibney Bilney in 2013. Mr. Bilney is survived by his sons, Richard Bilney and his wife Patricia of Stillwater and Robert Bilney of Franklin; his daughters, Susan Fiske of Fort Collins, Colorado, Mary Soifer and her husband David of Banner Elk, North Carolina, and Elizabeth Douglas and her husband Barry of Fredon; his brothers, Harold Bilney of Sparta and Robert Bilney and his wife Carol of Durham, North Carolina; six grandchildren; and four great grandchildren. Memorial services will be held at 4 p.m. on Friday, November 30, 2018 at the Pinkel Funeral Home, 31 Bank Street (Route 23), Sussex. Friends may pay their respects to the family on Friday prior to the service from 2 p.m. to 4 p.m.. Burial at Clove Cemetery will be private for the family. Private cremation services have been held at the convenience of the family. In lieu of flowers, the family requests that memorial donations may be made to the Alzheimer’s Association, 225 N. Michigan Avenue, Fl. 17, Chicago, IL 60601 or on their website (www.alz.org). Online condolences may be offered to the family at www.pinkelfuneralhome.com

The family of Richard E. Bilney created this Life Tributes page to make it easy to share your memories.

Send flowers to the Bilney family.