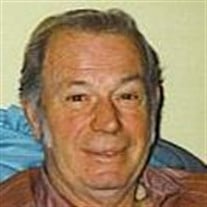 Wantage - Raymond D. R. Snover, Jr., age 84, passed away on Thursday, July 14, 2016 at his residence while surrounded by his loving family. Born in Pompton Lakes to the late Raymond D.R. Snover, Sr. and Elizabeth (Hopper) Snover, Mr. Snover had lived in Riverdale before moving to Wantage 20 years ago. He had served in the United States Navy during the Korean War. Mr. Snover had worked with his father in the family construction business, R. Snover & Sons and retired from Codirolli Construction in Pequannock when he was 62. He was a former member of the Pompton Reformed Church in Pompton Lakes and an active member of the Wanderers Car Club. He was predeceased by his loving wife of 63 years, Patricia A. Snover on July 14, 2014. Mr. Snover is survived by his two sons, Raymond “Chuck” Snover and his wife Eileen of Ogdensburg and Rick Snover and his wife Betty of Wantage; his two daughters, Deborah Christie and her husband Lawrence of Little Egg Harbor and Kathryn Houtman of Wantage; his seven grandchildren, Rachael, Leon, Jessica, Jason, Jocelind, Monica, and Amanda; and his great granddaughter, Riley. Funeral services will be held at 11 a.m. on Monday, July 18, 2016 at the Pinkel Funeral Home, 31 Bank Street (Route 23), Sussex. Interment to follow at Pompton Reformed Church Cemetery in Pompton Lakes. Friends may pay their respects to the family on Sunday, July 17, 2016 from 4 to 7 p.m. at the funeral home. In lieu of flowers, the family requests that memorial donations may be made to Karen Ann Quinlan Center of Hope Hospice, 99 Sparta Avenue, Newton, NJ 07860. Online condolences may be offered to the family at www.pinkelfuneralhome.com

The family of Raymond D.R. Snover, Jr. created this Life Tributes page to make it easy to share your memories.

Send flowers to the Snover family.