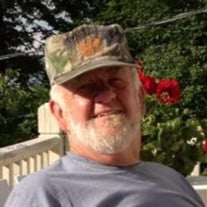 Wantage -Ralph H. Gardner, age 84, passed away on Friday, April 1, 2022 at his residence while surrounded by his loving family. Born on September 18, 1937 in Wykertown to the late Ben Sigler and Martha Gardner, Ralph graduated from Sussex High School in 1956 and has been a lifelong resident of the Sussex-Wantage area. He had served in the United States Army during the Korean War. Ralph worked for Asplundh Tree Service for several years before being employed by the State of New Jersey Department of Transportation, working at High Point and retired from Sussex division in 2000. He was a member of the American Legion Post 157 in Branchville and the Sussex Morris Conservation in Morris, New York. Ralph was also an avid High Point Wrestling fan and will be missed being seen in his front row seat at the matches. He loved spending time with family and friends and his children and grandchildren meant the world to him. He was predeceased by his brothers and sisters, John, Edward, William, David “Pete,” Helen, Dorothy, and Nancy. Ralph is survived by his devoted wife of 60 years, Joyce (Terwilliger); his son, Johnney Gardner of Branchville; his two daughters, Rhonda Gaccione and her husband Sam of Augusta and Deborah Heath of Horsham, PA; nine grandchildren, Roger and his partner Lisa, Ronnie and his wife April, Vanessa, Stephen, Joey and his fiancé Danelle, Jason and his partner Katie, Zachery, Brooke, and Abbey; eleven great grandchildren; his great great granddaughter; and his faithful dog, Alvin who would not leave his side. Private cremation services have been entrusted to the Pinkel Funeral Home, 31 Bank Street (Route 23), Sussex. Online condolences may be offered to the family at www.pinkelfuneralhome.com. In lieu of flowers please consider donating to High Point Wrestling, P.O. Box 699, Branchville, NJ 07826.

Wantage -Ralph H. Gardner, age 84, passed away on Friday, April 1, 2022 at his residence while surrounded by his loving family. Born on September 18, 1937 in Wykertown to the late Ben Sigler and Martha Gardner, Ralph graduated from Sussex High... View Obituary & Service Information

The family of Ralph H. Gardner created this Life Tributes page to make it easy to share your memories.

Send flowers to the Gardner family.