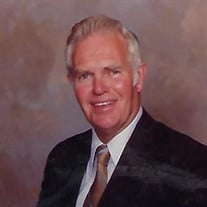 Sussex - Paul G. Styger, age 96, passed away on Wednesday, April 18, 2018 at Barn Hill Care Center in Newton. Born in Sussex to the late Charles J. and Mary E. (Kimble) Styger, Paul lived in Sussex all of his life. He graduated from Sussex High School and attended RPI (Rensselaer Polytechnic Institute). Paul served in the United States Air Force for three years during World War II and was a member of the Sussex County Veterans Committee. He was an active member of the First Baptist Church of Sussex, where he served as Deacon, trustee, church moderator, and various other boards. He spent much time helping the church to grow. Mr. Styger planned and started the Sussex Airport with four partners. This was his dream for his hometown of Sussex. The airport was entirely in his name in the 1950's and he became famous for his "Best In the East" small airport air show. He ran 32 air shows in total with pilots and acts from the United States and worldwide. Mr. Styger received the Frank G. Brewer Civil Air Patrol Memorial Aerospace Award in 1992 and was inducted into the New Jersey Aviation Hall of Fame on May 11, 1995. He was presented the Fred S. Wehran Aviation Achievement Award on May 20, 1986 and the Thomas B. Guire, Jr. Memorial Award for exceptional service to the Air Force Association of New Jersey in 2012. Mr. Styger was President of the Sussex High School Parent-Teacher Association for two years, served on the Sussex High School Board of Education for five years, and also served on the High Point Regional High School Board of Education for twelve years. He was a recipient of the Sussex County Chamber of Commerce Award. Mr. Styger is survived by his wife of 70 years, Jean (Runyon) Styger; his children, Jill Weekley and her husband John of Martinsburg, West Virginia, Jack Styger of Sussex, Rande Styger of Plymouth Meeting, PA, and Carol Menzer and her husband Gary of Mount Holly; his grandchildren, Danielle Parke, John Weekley, Corey Menzer, and Emily Menzer; and his great grandchildren, Frank and Ty Parke. Both Jean and Paul enjoyed spending summers with their family at Lake Pochung in Vernon as well as their time traveling together. Friends may pay their respects to the family on Saturday, April 21, 2018 from 12 noon to 1 p.m. at the Pinkel Funeral Home, 31 Bank Street (Route 23), Sussex. Memorial services will follow at 1 p.m. at the funeral home and a private inurnment will be held at the convenience of the family. In lieu of flowers, the family requests that memorial donations may be made to the First Baptist Church, 4 E. Main Street, Sussex, NJ 07461. Online condolences may be offered to the family at www.pinkelfuneralhome.com

Sussex - Paul G. Styger, age 96, passed away on Wednesday, April 18, 2018 at Barn Hill Care Center in Newton. Born in Sussex to the late Charles J. and Mary E. (Kimble) Styger, Paul lived in Sussex all of his life. He graduated from Sussex... View Obituary & Service Information

The family of Paul G. Styger created this Life Tributes page to make it easy to share your memories.

Send flowers to the Styger family.