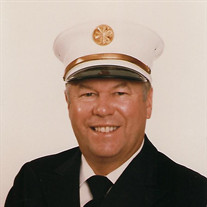 Wantage – Paul H. Grau, age 81, passed away unexpectedly on Thursday, March 22, 2018 at Newton Medical Center. Born at home in Sussex to the late Ralph H. and Edith (Johnson) Grau, Paul graduated from Sussex High School in 1952 and attended Elizabethtown College in Pennsylvania. He began his banking career with Farmers National Bank in Sussex where he went on to be branch manager and later Vice-President. Farmers National Bank merged with National Community Bank where Paul continued his employment in those positions at the Sussex Branch. When National Community Bank opened their branch in Wantage he transferred there and eventually returned back to the Sussex Branch, where he retired from the Bank of New York after 33 years in banking. Paul was also the Secretary for the Sussex – Wantage Board of Education for 26 years and retired in 1981 after the construction of the Clifton E. Lawrence School was completed. Paul enjoyed a very active life in the Sussex-Wantage community and was elected to the Wantage Township Committee in 1996 where he served two terms. During his terms, he served as Township Mayor twice. A highlight of his time as Mayor was being able to officiate numerous marriage ceremonies. He continued his service to the Township by serving as a member of the Planning Board until his passing. Paul was a lifetime volunteer member of the Sussex Fire Department, serving as Fire Department Chief in 1986 & 1987. In his earlier years with the department, he was a member of the First Aid Squad. He also enjoyed the positions of pitcher (nicknamed “Sunfish”) for the fire department softball team and team captain for the fire department golf team. He was the treasurer for the Fireman’s Relief Association, resigning in 2018 after completing 50 years in the position. Paul was an active and 50 year life member of the Sussex Kiwanis Club. He served as the club’s president twice and also was the Master of Ceremonies for their annual Old Timer’s Night. He was a 50 year member of the former Samaritan Masonic Lodge No.98 in Hardyston. He was an avid fisherman and hunter and belonged to the original Square 5 Gun Club, which became known as Virgin Acres Gun Club and was also a member of the Colesville Gun Club. He was very well known for his “gift of gab” and had numerous stories to tell. He was very knowledgeable about the history of Sussex Boro and Wantage Township. He enjoyed country music and after his retirement, spent much of his free time playing golf and taking trips to the “Mighty M.” Paul had a great love for baseball and was a coach for the Wallkill Valley Little League in his younger days. His love for baseball continued throughout his life through his enthusiasm for his beloved NY Yankees. He was one of the team’s biggest fans. Paul was also a huge supporter of the United States Military Service. He loved his family, community, fellow man and Country. Besides his parents, Paul was predeceased by his brother, Donald Grau in 2013 and his grandson, Cole Murphy in 2006. He is survived by his loving wife of 35 years, Mary Ellen (Tartar) Grau; his son, Paul H. Grau, Jr. and his wife Jennifer of Cabot, AR; his daughter, Cynthia Mills and her husband Kenneth of Spring Hill, Florida; Anne Klaus and her husband Stephen of Wantage; Karolee Murphy and her husband Patrick of Wantage; Kelly Cart and her husband Chuck of Hampton; twelve grandchildren and his beloved feline companion,Sassafras “Sassy.” On his behalf, Paul’s family would also extend their sincere gratitude to the Sussex Fire Department Family and Dr. P.C. Patel, whom was not only his physician, but his very good friend. Visitation will be held on Tuesday, March 27, 2018 from 6 p.m. to 8 p.m. at the Pinkel Funeral Home, 31 Bank Street (Route 23) Sussex. Funeral Services will be held at 12:30 p.m. on Wednesday, March 28, 2018 at the Sussex Fire Department, 25 Loomis Avenue in Sussex. Friends may also pay their respects to the family on Wednesday prior to the funeral service from 11 a.m. to 12:30 p.m. at the firehouse. Interment will follow at Fairview Cemetery in Wantage. In Lieu of flowers, the family requests that memorial donations may be made to the Sussex Fire Department, 25 Loomis Avenue, Sussex, NJ 07461 or to the Menkes Foundation, 23210 Daffodil Drive, California, MD 20619. Online condolences may be offered to the family at www.pinkelfuneralhome.com

The family of Paul H. Grau created this Life Tributes page to make it easy to share your memories.

Send flowers to the Grau family.