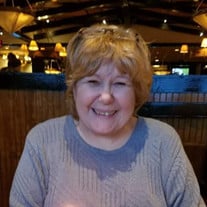 Wantage - Patricia A. Fichter, age 67, passed away on Sunday, March 1, 2020 at New York University Langone Medical Center in Manhattan, New York. Born in Wilkes- Barre, Pennsylvania, Patricia grew up in Waldwick before moving to Sussex County. She had received her Bachelor degree from Slippery Rock University. Patricia specialized in teaching special education students and had been employed as a teacher at Celebrate the Children in Denville. She had been an active member of St. Monica R.C. Church, where she served as an Eucharistic Minister, taught CCD, and sang in the former choir. While her sons were younger, Patricia was active in the Cub Scouts and served as the Pack Leader. She enjoyed quilting, sewing and crocheting. She was predeceased by her husband, George Fichter in 2009; her mother, Regina (Monahan) Stasko in 1994; and her brother, Richard Stasko in 2003. Patricia is survived by her two sons, John and George both of Wantage; her father, Andrew Stasko of Charleston, South Carolina; and two brothers, David Stasko of Charleston, South Carolina and Michael Stasko and his wife Kathy of Ormond Beach, Florida. Mass of Christian Burial will be held at 12 noon at St. Monica R.C. Church, 33 Unionville Avenue, Sussex on Thursday, March 5, 2020. Friends may pay their respects to the family one hour prior to mass from 11 a.m. to 12 noon at the church. Private cremation services will follow. In lieu of flowers, the family requests that memorial donations may be made to the family or the funeral home to help defray the funeral costs. Funeral arrangements have been entrusted to the Pinkel Funeral Home, 31 Bank Street (Route 23), Sussex. Online condolences may be offered to the family at www.pinkelfuneralhome.com

The family of Patricia A. Fichter created this Life Tributes page to make it easy to share your memories.

Send flowers to the Fichter family.