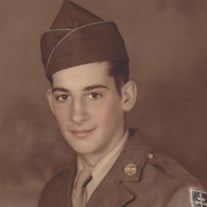 Hamburg - Norman "Skip" Kimble, age 92, passed away on Sunday, October 30, 2016 at Andover Subacute and Rehabilitation Center while surrounded by his loving family. Born and raised in Hamburg to the late Ernest and Lena (Morrow) Kimble, Skip lived in Hamburg all of his life. He had served in the United States Army during World War II and was honorably discharged as a Corporal. He served with the First, Third, and Seventh Armies, taking part in the battles from Normandy to Austria. He received the Infantry Combat Medal, ETO ribbon with four Battle Stars, and Good Conduct and Victory medals. Skip also reenlisted in the Navy during the Korean War. He had previously been employed by Plastoid Corporation in Hamburg for 25 years and retired from Ames Rubber Corp. in Hamburg after working there for 25 years. Mr. Kimble was predeceased by his wife, Mildred in 2006; his son, Donald Kimble in 2008; his brothers, Ernest Kimble and Nelson "James" Kimble; and his sister, Shirley Holley. He is survived by his four daughters, Bonnie Demarest and her husband George of Hamburg, Constance Heater and her husband Robert of Hainesville, Ann Marie Kimble and her husband Alan Szelesta of Dingmans Ferry, PA, and Lydia Schumann and her husband David of Wantage; 14 grandchildren; 12 great grandchildren; and his daughter-in-law, Rebecca Kimble of Hamburg. In lieu of flowers, the family requests that memorial donations may be made to the Alzheimer's Association, Atlantic County Branch Office, 25 Dolphin Ave., Bldg. D, Northfield, NJ 08225 or to the Pancreatic Cancer Action Network, 2141 Rosencrans Avenue, Suite 7000, El Segundo, CA 90245, which is the disease that his son, Donald suffered with before his death. Private cremation services have been entrusted to the Pinkel Funeral Home, 31 Bank Street (Route 23), Sussex. Online condolences may be offered to the family at www.pinkelfuneralhome.com

Hamburg - Norman "Skip" Kimble, age 92, passed away on Sunday, October 30, 2016 at Andover Subacute and Rehabilitation Center while surrounded by his loving family. Born and raised in Hamburg to the late Ernest and Lena (Morrow) Kimble, Skip... View Obituary & Service Information

The family of Norman "Skip" Kimble created this Life Tributes page to make it easy to share your memories.

Send flowers to the Kimble family.