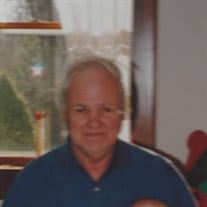 Wantage - Nick Feenstra, age 78, passed away on Sunday, May 21, 2017 at St. Luke's Hospital - Anderson Campus in Easton, Pennsylvannia. Nick was born in Nylan, Friesland, the Netherlands on October 16, 1938 to the late Klaas and Hinke (Terpstra) Feenstra. After his family immigrated to the United States in 1956, he chose to serve in the United States Army as a medic during the Cold War. Nick had been a self-employed carpenter and was known for his passion for tractors, tools and treasures. Nick and Joanne enjoyed exploring their beloved adoptive country by taking the road less travelled on the way to various club gatherings, auctions, shows, and sales. He was always on the hunt for the unknown and unique. He had an inquisitive mind and loved spending his time researching and figuring out how his prized finds worked, what they were for, and sharing with others the story behind it. He was always tinkering in his shop working on a project; sometimes he even finished one. He served as a fireman on the Wantage Township Fire Department for 36 years, was a member of the Wantage United Methodist Church, the Ag Society, North Jersey Engine Club, Shaw Dual Club, Blue Mountain Antiques, and various other clubs. Nick looked forward to spending time at shows talking to the visitors about all the equipment and how it worked. He was predeceased his brother, Henry Feenstra. Nick is survived by his wife of 54 years, Joanne (Ritsema); his three daughters, Arlene Feenstra and her husband Gerard Meivogel of Aalsmeer, the Netherlands, Helen Kuperus and her husband John of Sussex, and Joanne Hennessey and her husband Sean of Essex Junction, Vermont; his four sisters, Ann DeJager and her husband George of Smithville Flats, New York, Theresa Viersma and her husband Bob of Tranquility, Tonia Kuperus and her husband Henry of Stanely, New York, Dorothy Dickinson and her husband Thomas of Baldwinsville, New York; and his twelve grandchildren, Joshua, Brianna, Nicole, Alisha, Karissa, Anneke, and Caleb Kuperus and Bridget, Shannon, Erin, Riley and Cole Hennessey and many nieces and nephews. Friends may pay their respects to the family on Tuesday, June 6, 2017 from 4 p.m. to 7 p.m. with a memorial service following at 7 p.m.; both at the Sussex Christian Reformed Church, 49 Unionville Avenue, Sussex, NJ 07461. In lieu of flowers, the family requests that memorial donations may be made to the Wantage United Methodist Church, Building Fund, 199 Libertyville Road, Wantage, NJ 07461 or to the Wantage Township Fire Department, 888 Route 23, Wantage, NJ 07461. Funeral arrangements have been entrusted to the Pinkel Funeral Home, 31 Bank Street (Route 23), Sussex. Online condolences may be offered to the family at www.pinkelfuneralhome.com

Wantage - Nick Feenstra, age 78, passed away on Sunday, May 21, 2017 at St. Luke's Hospital - Anderson Campus in Easton, Pennsylvannia. Nick was born in Nylan, Friesland, the Netherlands on October 16, 1938 to the late Klaas and Hinke (Terpstra)... View Obituary & Service Information

The family of Nick Feenstra created this Life Tributes page to make it easy to share your memories.

Send flowers to the Feenstra family.