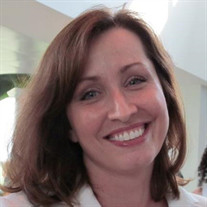 Sussex - Michelle Bassani McKenney, age 48, peacefully passed away on Thursday, August 9, 2018 at Chilton Medical Center after a lengthy illness. Born in Dover, Michelle grew up in Sussex County, where she has lived all of her life. She was a 1988 graduate of High Point Regional High School and earned her Bachelor of Nursing degree from William Paterson University. She was dedicated to her nursing profession and began her career at St. Clare’s Hospital in Sussex, where she continued to work per diem. She was a RN-BSN and had been employed by Chilton Medical Center in Pequannock. Growing up on a farm in Wantage, Michelle became very fond of all animals, but had a special love for all cats. She was a member of Psi Chi, International Honor Society of Psychology, International Association of Forensic Nursing, and the American Society of PeriAnesthesia Nurses. Michelle was predeceased by her parents, Bertha Bassani in 2010 and Vincent Bassani in 2016. She is survived by her loving sons, Adam McKenney of Elizabethtown, PA and Nicholas McKenney of Sussex; her brothers, Peter Bassani and his wife Diane of Hawley, PA, Ronald Bassani and his loving companion Judy Ann Castiglione of Wantage, Vincent Bassani of Wantage, and Donald Bassani and his wife Tanya of Wantage; her sister, Donna Nacarlo of Effort, PA; and her devoted companion, Rich Linden of Sussex. Memorial services will be held at 7 p.m. on Tuesday, August 14, 2018 at the Pinkel Funeral Home, 31 Bank Street (Route 23), Sussex. Friends may pay their respects to the family on Tuesday prior to the service from 4 p.m. to 7 p.m. at the funeral home. In lieu of flowers, the family requests that memorial donations may be made in Michelle’s memory to the American Cancer Society, P.O. Box 22478, Oklahoma City, OK 73123 or to Father John’s Animal House, 50 Father Johns Lane, Lafayette, NJ 07848. Online condolences may be offered to the family at www.pinkelfuneralhome.com

Sussex - Michelle Bassani McKenney, age 48, peacefully passed away on Thursday, August 9, 2018 at Chilton Medical Center after a lengthy illness. Born in Dover, Michelle grew up in Sussex County, where she has lived all of her life. She was... View Obituary & Service Information

The family of Michelle E. Bassani McKenney created this Life Tributes page to make it easy to share your memories.

Send flowers to the McKenney family.