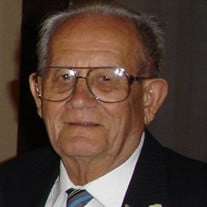 Wantage - Michael Sedlak, Jr., age 92, passed away on Friday, September 30, 2016 at the Homestead Rehabilitation and Healthcare Center in Frankford Township. Born in Udol, Czechoslovakia, Mr. Sedlak came to the United States in 1951 and resided in Clifton. He moved to Garfield, where he lived for 30 years and spent the past 30 years in Wantage. Mr. Sedlak had been employed by the Okonite Company as a cable splicer in Passaic. He was predeceased by his parents, Michael, Sr. and Helen (Kravcak) Sedlak and his three brothers, John Sedlak, Sr., Nicholas Sedlak and Paul Sedlak. He is survived by his wife of 72 years, Anna (nee Sokol); his daughter, Marge Bachir and her husband Stanley of Wantage; his two sons, Michael Sedlak and his late wife Donna of Wantage and Stefan Sedlak and his wife Sandra of Westwood; his brother, Steve Sedlak and his wife Gudrun of Saddle Brook; his sister, Helen Manz and her husband Andrew of Clearwater, Florida; his five grandchildren, Michelle Bachir-Wright and her husband Jeffrey of Fairfax, VA, Kenneth Bachir and his fiance Elizabeth Hoolehan of Pullman, WA, Stacey Shapiro and her husband Jay of Waldwick, Sheryl Tramontano and her husband Michael of New Milford, and Danielle Sedlak of Falls Church, VA; four great grandchildren, Andrew, Elizabeth, Arlo and Nathan; and one niece and many nephews. Funeral services will be held at 9:30 a.m. on Thursday, October 6, 2016 at the Pinkel Funeral Home, 31 Bank Street (Route 23), Sussex and 11:30 a.m. at St. Michael Cathedral Chapel, 415 Lackawanna Avenue, Woodland Park. Interment to follow at St. Michael Cemetery, South Hackensack. Friends may pay their respects to the family on Wednesday from 2-4 and 7-9 p.m. at the funeral home. Online condolences may be offered to the family at www.pinkelfuneralhome.com

The family of Michael Sedlak Jr. created this Life Tributes page to make it easy to share your memories.

Send flowers to the Sedlak family.