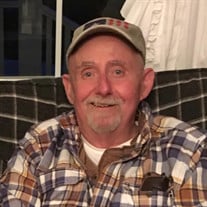 Pine Bush, New York - Michael D. Keats, age 75, passed away on Thursday, January 30, 2020 at Orange Regional Medical Center in Middletown, New York. Born in Sussex, New Jersey to the late Douglas Keats and Ada (Matthews) Keats, Mike had lived in Unionville, New York before recently moving to Pine Bush ten years ago. He had served in the United States Marine Corp. during the Vietnam Era. Mr. Keats had been employed as the parts manager for Pine Bush Equipment before his retirement 25 years ago. He was a founding and lifetime member of the American Legion Post 213 in Sussex, a lifetime member of the Marine Corps League, a lifetime member of the Greenville VFW Post 3175, and a member of the Sussex United Methodist Church. Besides his parents, Mr. Keats was predeceased by his brother, Patrick A. Keats, Sr. in 1995, his sister, Viola D. Kinney in 2015, and his step-father, Albert Mittelstaedt, Sr.. He is survived by his daughters, Shelli Kroll and her husband Stephen of Port Jervis, New York, Sheri Keats and her husband Ray of Pine Bush, New York, and Amy Stewart and her husband David of Wantage; his brother, Albert Mittelstaedt, Jr. and his wife Linda of Browns Mills, New Jersey; his sister, Joyce Malsbury of Malabar, Florida; five grandchildren, Roger and his wife Lauren, Brittany, Faith, Paige, and Kourtney; his great grandchildren, Taylor and Wyatt; several nieces and nephews; and his “best buddy,” Macey. Funeral services will be held at 10 a.m. on Monday, February 3, 2020 at Pinkel Funeral Home, 31 Bank Street (Route 23), Sussex. Interment will follow at Deckertown-Union Cemetery. Friends may pay their respects to the family on Sunday, February 2, 2020 from 2 p.m. to 5 p.m. at the funeral home. In lieu of flowers, the family requests that memorial donations may be made in Michael Keats’ name to St. Jude Children’s Research Hospital, 501 St. Jude Place, Memphis, TN 38105 or the Deer Park Humane Society, 202 Route 209, Port Jervis, New York 12771. Online condolences may be offered to the family at www.pinkelfuneralhome.com

The family of Michael D. Keats created this Life Tributes page to make it easy to share your memories.

Send flowers to the Keats family.