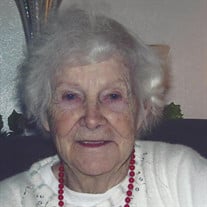 Sussex - Mary D. Lewis, age 97, passed away on Sunday, January 7, 2018 at Orange County Regional Medical Center in Middletown, New York. Born in Montorsville PA to the late Frank and Dorothy (VanderHoff) Northrop, Mrs. Lewis had lived in Sussex County most of her life. She was a volunteer at St. Clare's Hospital in Sussex, worked the voter polls in Sussex Borough for many years, was a former member of the Assembly of God Church in Hamburg, and was currently attending Living Waters Fellowship in Newton. Mrs. Lewis was an amazing woman with a heart of gold and had a special fondness and love for all animals. She was predeceased by her husband, Nelson J. Lewis in 1990; her son, Rodney Lewis in 2003; and her daughters, Mary Elizabeth, Martha Julia, and Lucretia Ann. Mrs. Lewis is survived by her son, Ricky N. Lewis and his partner, Michael Lessing of Wurstboro, New York; her sister, Ida Mae Hill of Hagerstown, Maryland; her two grandchildren, Tiffany and Carrie; and her two great grandchildren, Benjamin and Kayden. Funeral services will be held at 11 a.m. on Friday, January 12, 2018 at the Pinkel Funeral Home, 31 Bank Street (Route 23), Sussex. Interment will follow at North Hardyston Cemetery. Friends may pay their respects to the family on Thursday from 7 to 9 p.m. at the funeral home. Online condolences may be offered to the family on www.pinkelfuneralhome.com

The family of Mary D. Lewis created this Life Tributes page to make it easy to share your memories.

Send flowers to the Lewis family.