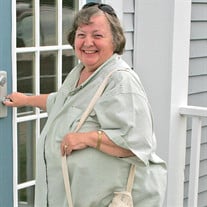 Marilyn Crowell Seely, age 79, entered eternal rest at her home Tuesday, May 22, 2018, surrounded by her loving family. Marilyn was born to the late Merrill and Irene Crowell in Middletown, New York, and grew up in the Beemerville section of Wantage Township. She graduated from Sussex High School in 1956 and then attended Trenton State College where she graduated in 1960 with a degree in primary education. Marilyn then worked in Madison, New Jersey, as a third grade teacher. She met the love of her life, Earle, in the summer of 1960 at the Sussex County Fair and they married in 1961. The couple lived in Boonton and then later in Boonton Township. Marilyn left her teaching job to devote her time to raising her two children. She later worked at Radio Frequency Labs in Boonton Township and then returned to teaching as a preschool teacher at "Building Blocks of Learning" in Denville until she retired in 2005. Marilyn and Earle moved back to Beemerville ten years ago where they enjoyed the rest of their days together. Marilyn was an active member of the First Reformed Church of Boonton, where she was a member of the Consistory as a Deacon and then later as an Elder. She was a Sunday School teacher and also the Church Treasurer for many years. Besides her parents, Marilyn was predeceased by her sister, Audrey Crowell, in 1935. She is survived by her husband of 56 years, Earle S. Seely; her son, Earle "Ned" Seely and his wife, Dawn; her daughter, Rebecca; and her three grandchildren: Casey, Emily and Daniel. A Memorial Service will be held Sunday, June 3, 2018, at 2:30 PM at the First Reformed Church of Boonton, 236 Washington Street, Boonton. In lieu of flowers, the family asks that anyone wishing to make a donation in Marilyn's name to please consider one of the following organizations: Karen Ann Quinlan Hospice, 99 Sparta Avenue, Newton, NJ 07860, the First Reformed Church of Boonton, 236 Washington Street, Boonton, NJ 07005, the Wantage First Aid Squad, 888 Route 23, Wantage, NJ 07461, or the Boonton Kiwanis First Aid Squad, 150 Lathrop Avenue, P.O. Box 16, Boonton, NJ 07005.

Marilyn Crowell Seely, age 79, entered eternal rest at her home Tuesday, May 22, 2018, surrounded by her loving family. Marilyn was born to the late Merrill and Irene Crowell in Middletown, New York, and grew up in the Beemerville section of... View Obituary & Service Information

The family of Marilyn C. Seely created this Life Tributes page to make it easy to share your memories.

Send flowers to the Seely family.