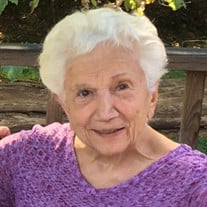 Marie Antonette Cerchio passed away peacefully at home in Ridgewood on Friday, February 5, 2021 at the age of 90, with her daughter Claudia by her side. Marie was born on March 23, 1930 in Passaic. She moved to Jersey City with her family when she was a child. It was there, in 1944, where she met her “one and only” love, Dominick Cerchio through neighborhood friends. From then on, the two became inseparable. In 1947, Marie attended business school in Jersey City, and soon after started work as a comptometer(the very first calculator) operator for a local company in Jersey City. They married in September of 1950 and soon after, her husband Dominick, was called to serve in the Korean War in Germany. Upon her husband’s return from Germany in 1951, they started their life together as a married couple. In 1959, they opened Dom’s Delicatessen in North Bergen. For the next 20 years, they raised their 3 children and ran the very popular deli. In 1978, Marie and Dominick retired to their log cabin in Wantage. Marie was employed as a teacher’s aide for many years at the Sussex-Wantage Regional School District. She also worked side by side with her husband Dominick, prepping all the food for his hot dog wagon, which was a 20 year adventure. A member of St. Monica R.C. Church in Sussex, Marie was a devout Catholic who was proud of her Italian heritage. She volunteered as secretary for the Catholic retreat, “The Sanctuary of Mary, Our Lady of the Holy Spirit,” located in Branchville, for many years. She is preceded in death by her husband, Dominick Cerchio on February 1, 2021. She is survived by their children, Claudia Cerchio Allocco and her husband James, Steven Cerchio and his wife Mimi, and Christopher Cerchio and his wife Celia; his ten grandchildren, Jennifer Allocco, Christina Cerchio Morel, David Allocco and his wife Tina, Matthew Cerchio and his wife Cristina, Anthony Cerchio and his wife Terri, Nicholas Cerchio and his wife Marisa, Jessica Cerchio Cherboni and her husband Ray, Andrew Cerchio and his wife Samantha, Dominic Cerchio and his wife Abby, and Katie Cerchio Fugman and her husband Stephen; and 13 great grandchildren who loved their “G-G-Ma.” Marie is also survived by her beloved brother, Dominic DeVito and his wife Marjorie and their children, Rachel DeVito and her husband Marco and Alex DeVito and his wife Kelly, who are two of her numerous nieces and nephews. Private graveside services for Marie and her husband, Dominick will be held together for the family at Clove Cemetery in Wantage. In lieu of flowers, please consider a memorial contribution to the Alzheimer’s Association in Marie Cerchio’s memory, who was inflicted with this horrible disease. Online condolences may be offered to the family at www.pinkelfuneralhome.com

Marie Antonette Cerchio passed away peacefully at home in Ridgewood on Friday, February 5, 2021 at the age of 90, with her daughter Claudia by her side. Marie was born on March 23, 1930 in Passaic. She moved to Jersey City with her family when... View Obituary & Service Information

The family of Marie Antonette Cerchio created this Life Tributes page to make it easy to share your memories.

Marie Antonette Cerchio passed away peacefully at home in Ridgewood...

Send flowers to the Cerchio family.