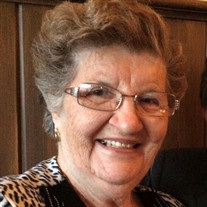 Maria Graziella (Fratantoni) DiFulco, a self-taught chef and baker who dazzled everyone for decades with her culinary talents but whose truest joy derived from time spent with her loved ones, died at her Wantage, N.J. home on Monday, November... View Obituary & Service Information

The family of Maria Graziella DiFulco created this Life Tributes page to make it easy to share your memories.

Send flowers to the DiFulco family.