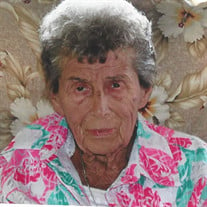 Vernon- Margaret “Mickey” C. Schreiber, age 86, peacefully passed away on Saturday, March 25, 2017 at her residence while surrounded by her loving family. Born in Englewood on September 10, 1930 to the late Thomas and Catherine (Storf) Lynch, Mrs. Schreiber lived in Teaneck before moving to Sussex County. She had been employed by Bob Baldwin Transportation as a school bus driver and also in the cafeteria at the Vernon Township School System before she retired in 1994. Mrs. Schreiber especially enjoyed spending time with her family and taking pride in her home. She was predeceased by the love of her life and husband of 63 years, Joseph P. Schreiber on November 18, 2012; her great grandson, Joseph Mason Schreiber on October 16, 2013; and her son, Joseph Schreiber on September 25, 2015. Mrs. Schreiber is survived by her son, John Schreiber and his wife Kathy of Sparrowbush, New York; her daughters, Patricia McCooey and her husband James of Sparrowbush, New York and Barbara Yetter and her husband Walter of Wantage; her daughter-in-law, Ruth Schreiber of Vernon; her sister-in-law, Helen Lynch of Tillson, New York; twelve grandchildren, James and Michael McCooey, Amy Ross, Joseph Schreiber, Heather Thompson, Gail Kaszynski, Todd O’Brien, John and Hope Schreiber, Dustin and Barry Glass, and Mark Yetter; nineteen great grandchildren; her two angels, Donna and Tea; and many nieces and nephews. Funeral services will be held at 9:30 a.m. on Saturday, April 1, 2017 at the Pinkel Funeral Home, 31 Bank Street (Route 23), Sussex. Mass of Christian Burial will be held at 10 a.m. at St. Monica R.C. Church, 33 Unionville Avenue, Sussex. Private cremation will be held at the convenience of the family. Friends may pay their respects to the family on Friday from 4 to 7 p.m. at the funeral home. In lieu of flowers, the family requests that memorial donations may be made to Karen Ann Quinlan Center of Hope Hospice, 99 Sparta Avenue, Newton, NJ 07860. Online condolences may be offered to the family at www.pinkelfuneralhome.com.

Vernon- Margaret &#8220;Mickey&#8221; C. Schreiber, age 86, peacefully passed away on Saturday, March 25, 2017 at her residence while surrounded by her loving family. Born in Englewood on September 10, 1930 to the late Thomas and Catherine... View Obituary & Service Information

The family of Margaret C. Schreiber created this Life Tributes page to make it easy to share your memories.

Send flowers to the Schreiber family.