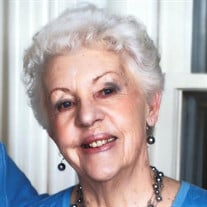 Sussex -Madeline J. Decker, age 97, peacefully passed away on Friday, April 22, 2022 at her residence while surrounded by her loving family. Born in Sussex to the late Harry and Emma (Byrd) Johnson, Mrs. Decker graduated from Sussex High School in 1942 and resided in the borough all of her life. She began her career in the banking industry with the former Farmer’s National Bank and was then employed by National Community Bank and the Bank of New York, when Mrs. Decker retired. She was a lifelong member of the First Baptist Church of Sussex and had served as the church treasurer for many years. Mrs. Decker was a Trustee of the Sussex-Wantage Public Library Association, a former member of the Ladies Auxiliary of the Sussex Fire Department, member of the former High Point Garden Club, member of the Red Hat Society and in her younger years, was a Girl Scout leader. Besides her parents, Mrs. Decker was predeceased by her daughter, Paula Decker Everitt on April 2, 2016; her brother, Harry Johnson, Jr., and her sister, Willeta Knoblauch. She is survived by her devoted husband of 72 years, Chester E. Decker, Sr.; her son, Chester E. Decker, Jr. and his companion Susan Cox of Wantage; her daughter, Christine Decker Henry and her husband Donald of Wantage; nine grandchildren; and ten great grandchildren. Private funeral services were held for the immediate family at Clove Cemetery. In lieu of flowers, please consider a donation in Madeline Decker’s memory to the First Baptist Church of Sussex, 2 East Main Street, Sussex, NJ 07461. Funeral arrangements have been entrusted to the Pinkel Funeral Home, 31 Bank Street (Route 23), Sussex. Online condolences may be offered to the family at www.pinkelfuneralhome.com.

The family of Madeline J. Decker created this Life Tributes page to make it easy to share your memories.

Send flowers to the Decker family.