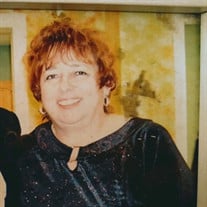 Wantage - Lucinda “Cindy” Mary (Vreeland) Meeker, age 67, beloved precious wife, best friend and forever love of Reverend Robert Meeker went peacefully to the arms of her Lord and Savior Jesus Christ on Thursday, March 26, 2020 after battling a severe blood and heart infection. Lucinda grew up in Oak Ridge and joined the United States Air Force during the Vietnam Era. After her service to her country, Lucinda moved to Sussex County. She met her husband, Robert A. Meeker and they wed on December 16, 1995. She received the great gift of God’s grace and salvation in Jesus Christ in 1994 at Christian Faith Fellowship Church. She was a member there along with her husband, son, daughter in love and step-son. This was her most cherished treasure that she spoke of often. She shared the gospel with many people and always dreamed of sharing the gospel in another language. Her dream came to fruition when she went on a Mission Trip with her husband to Guatemala. On this trip, Cindy was able to share the gospel at the Guatemalan Independence Day. Besides her love of sharing the Word of God, Cindy was a graduate of the Christian Clown College and enjoyed playing her role as a clown known as “Snickers” and “Prayee-Flower.” She also became a puppeteer and taught many children to use puppets. This gave her so much pleasure when she saw her audience’s eyes light up because of her role as a clown and a puppeteer. Lucinda put herself through college working as a waitress while raising her son, Ray. She earned a bachelor’s degree in Computer programming by attending college evening classes. She was employed at various companies doing computer programming and operations, including Passaic Crushed Stone in Pompton Lakes, New Jersey. Lucinda was employed by Christian Faith Fellowship Church as the Children’s Director and as of late, served as secretary/receptionist of the church. She was a member of Newton Kennel Club, Northern New Jersey Saint Bernard Club and Greater Delaware Valley Papillon Club. She was “momma” to Petey, Ellie papillons, and Bonnie and Sadie dachshunds. Lucinda loved anything to do with children and animals. Lucinda was predeceased by her parents. She is survived by her devoted husband, Rev. Robert A. Meeker; her son, Raymond VanLenten and his wife Karen of Florida; her step-son, Shane Meeker and his wife Gladiana of New Jersey; her step-daughter, Sheena Bibee and her husband Nick of Ohio; and her grandchildren, Christian and his wife Jessica, Zachary, Sydney, Nora, Kayla Rose, and Kelsie Anne. Due to the government health restrictions, a memorial service will be held at a later date. Please check the funeral home website and the New Jersey Herald for updated information. In lieu of flowers, the family requests that memorial donations may be made in Lucinda’s memory to Christian Faith Fellowship Church, 3188 State Route 94, Franklin, NJ 07416. Private cremation services have been entrusted to the Pinkel Funeral Home, 31 Bank Street (Route 23), Sussex. Online condolences may be offered to the family at www.pinkelfuneralhome.com

The family of Lucinda "Cindy" Mary (Vreeland) Meeker created this Life Tributes page to make it easy to share your memories.

Send flowers to the Meeker family.