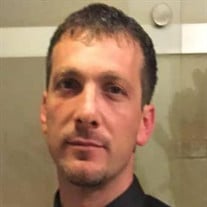 Dingmans Ferry, PA - Louis J. Stellato, IV, age 47, passed away on Tuesday, September 17, 2019 at Lehigh Valley Hospital - Pocono in East Stroudsburg, Pennsylvania. Born on May 10, 1972 to Mary Ann and Louis Stellato, III in Belleville, New Jersey, Louis was raised in Vernon and graduated from West Milford High School. He moved to Dingmans Ferry, Pennsylvania 20 years ago. Louis was a self-employed contractor and a gifted Master Carpenter. He was a member of the Dingmans Ferry Fire Department and served as second assistant Chief for many years. He was a family man and enjoyed spending time with his family and children. He spent every Father’s Day with his kids white water rafting from the day they were born. He loved boating and vacationing in Lake George with his wife, Jade. Louis is survived by his wife, Jade; his children, Joseph, Samantha and her boyfriend Ryan, Anthony, and Paisley; his mother, Mary Ann Garafalo and his step-father Joseph; his father, Louis Stellato, III and his step-mother Maria; his brothers, David Stellato and his wife Dawn, Daniel Stellato and his wife Virginia, Brian Garafalo, and Phillip Stellato and his fiancé Kaitlin; his sisters, Stacy Sanchez and her husband Victor and Kristine Sassoon and her husband Zachery; and many nieces and nephews. Funeral services will be held at 9 a.m. on Saturday, September 21, 2019 at Pinkel Funeral Home, 31 Bank Street (Route 23), Sussex. Interment to follow at Glenwood Cemetery. Friends may pay their respects to the family on Friday from 4 to 8 p.m. at the funeral home. The family requests that memorial donations may be made in Louis Stellato’s memory to the family to help defray the funeral costs. Online condolences may be offered to the family at www.pinkelfuneralhome.com.

The family of Louis J. Stellato IV created this Life Tributes page to make it easy to share your memories.

Send flowers to the Stellato family.