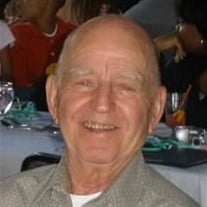 Vernon - Leonard R. Den Bleyker, age 89, peacefully passed away on Wednesday, November 21, 2018 at his residence while surrounded by his loving family. Born in Teaneck to the late James and Irene (Merwede) Den Bleyker, Len resided in Lyndhurst before moving to the Lake Wallkill section of Vernon in 1972. He served in the United States Army during the Korean Conflict. Len was active in the Lake Wallkill community and served as a District Representative for 30 years. He worked for Lowe Paper Company in Ridgefield and Blazer Corporation in East Rutherford, and retired from the Vernon Township Board of Education after 19 years of service.Besides his parents, Len was predeceased by his sister, Gloria Schmidt and his brothers, Howard and Ronald Den Bleyker. He is survived by his wife of 59 years, Rosemary (Mathews); his two sons, Robert Den Bleyker and his wife Lisa of Lake Shawnee and Matthew Den Bleyker and his wife Michelle of Sun City, Arizona; his daughters, Karen Shaw and her husband Bill of Oak Ridge and Janet Centrone and her husband Andrew of Harrisburg, PA; his brother, Arthur Den Bleyker and his wife Carol of Florida; his sister, Rose Hollenbeck and her husband Bob of Barnagat; his grandchildren, Katelyn Shaw, Timothy and Kevin Den Bleyker, Nicholas and Jack Centrone, Matthew and Mason Den Bleyker; and his beloved dog, Beau. Mass of Christian Burial will be held at 10:30 a.m. on Wednesday, November 28, 2018 at St. Francis de Sales R.C. Church, 614 Route 517, Vernon. Interment to follow at Clove Cemetery in Wantage. Friends may pay their respects to the family on Tuesday from 2-4 and 7-9 p.m. at the Pinkel Funeral Home, 31 Bank Street (Route 23), Sussex. In lieu of flowers, the family requests that memorial donations may be offered in Len’s memory to Karen Ann Quinlan Center of Hope Hospice, 99 Sparta Avenue, Newton, NJ 07860. Online condolences may be offered to the family at www.pinkelfuneralhome.com

The family of Leonard R. Den Bleyker created this Life Tributes page to make it easy to share your memories.