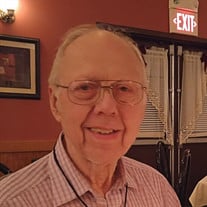 Glens Falls, NY - Kenneth E. Meredith, age 90, passed away on Friday, August 25, 2017 at Glens Falls Hospital in Glens Falls, New York. Born in Chicago, Illinois to the late Manuel Elroy and Mildred (Bretag) Meredith, Ken had lived in Sussex County most of his life before recently moving to the Lake George, New York area. He had served in the United States Army during both World War II and the Korean War. He received his undergraduate degree from the University of Illinois and graduated from Columbia University with a Masters in Hospital Administration. Ken served as the Administrator of Alexander Linn Hospital in Sussex for 16 years and then retired after serving as the Executive Director of The House of the Good Shepherd Nursing Home in Hackettstown for 20 years. He was a Charter Member of the Wallkill Valley Rotary Club and was an active member of the club for 58 years. He served as the President of the Club in 1999-2000 as well as being the secretary for 53 years. Ken was the Club's official “shopper” for food supplies for every dinner, and his basement was the “storage unit” for all Rotary supplies, banners, and other Rotary paraphernalia. He was a known fixture in the kitchen both at the annual Summer BBQ, where baked beans were his specialty and at the club's Roast Pork dinner held in the Fall. Ken believed in the programs of Rotary and his family hosted Rotary Exchange students and members of the GSE Teams. He was a Major Donor to the Rotary Foundation and received numerous Paul Harris Fellows. Ken served as the District Governor in 2002-2003 for Rotary District 7470, on the "In Flight" (the Rotary newspaper) Committee for more than ten years, active on the District Leadership Team for many years, and was chairman or member on various district level committees. He was predeceased by his wife, Helen G. Meredith on April 13, 1995. Ken is survived by his son, Doug Meredith and his daughter-in-law, Patricia of Lake Luzerne, New York. Funeral services will be held at 10 a.m. on Tuesday, August 29, 2017 at the Pinkel Funeral Home, 31 Bank Street (Route 23), Sussex. Interment will follow at Clove Cemetery in Wantage. Friends may pay their respects to the family on Monday from 4 to 7 p.m. at the funeral home. In lieu of flowers, the family requests that memorial donations may be made in Ken's memory to the Rotary Foundation, 14280 Collection Center, Chicago, Illinois 60693. Online condolences may be offered to the family on www.pinkelfuneralhome.com

The family of Kenneth E. Meredith created this Life Tributes page to make it easy to share your memories.

Send flowers to the Meredith family.