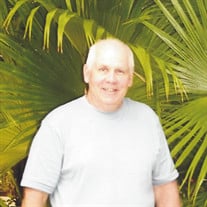 Wantage - Kenneth J. Fuchs, Sr., age 68, unexpectedly passed away on Thursday, May 5, 2016 at St. Clare’s Hospital in Sussex. Born in Englewood to the late Francis and Florence (Bethman) Fuchs, Mr. Fuchs was raised in Saddle Brook and moved to Wantage in 1972. He had served in the United States Army during the Vietnam War. Mr. Fuchs had been employed as a Postal Clerk at the Paramus Post Office for 42 years and had retired in 2009. He enjoyed woodworking and used his talents to design different seasonal wood crafts and specialized in Nativity Scenes and his work was showcased on the cover of the Advertiser News under his business name, Country Cutups. He was a member of St. Jude The Apostle Church in Hamburg, a lifetime member and former officer of the Sussex Elks, The Northern Vietnam Veterans of America, Wallkill Chapter #1002, Third Degree Knights of Columbus member, and a member of the American Legion. Mr. Fuchs was predeceased by three brothers, Edward, Michael, and Stephen Fuchs. He is survived by his wife of 47 years, Rosemary (Burns); his son, Kenneth J. Fuchs, Jr. and his wife Christa of Dingmans, PA; his two daughters, Holly Kearns and her husband Daniel of Coconut Creek, Florida and Erin Kaegi and her husband Joseph of Sussex; his brother, Richard Fuchs of Brooklyn, New York; and seven grandchildren. Funeral services will be held at 9:15 a.m. on Tuesday, May 10, 2016 at the Pinkel Funeral Home, 31 Bank Street (Route 23), Sussex. Mass of Christian Burial will be held at 10 a.m. at St. Jude The Apostle Church, 4-24 Beaver Run Road, Hamburg. Interment will follow at Northern New Jersey Veterans Memorial Cemetery, 75 North Church Road, Sparta, NJ 07871. Friends may pay their respects to the family on Monday, May 9, 2016 from 2-4 and 7-9 p.m. at the funeral home. In lieu of flowers, the family requests that donations may be made to the Northern New Jersey Veterans Memorial Cemetery, P.O. Box 82, Sparta, NJ 07871. Online condolences may be offered to the family at www.pinkelfuneralhome.com

The family of Kenneth J Fuchs created this Life Tributes page to make it easy to share your memories.

Send flowers to the Fuchs family.